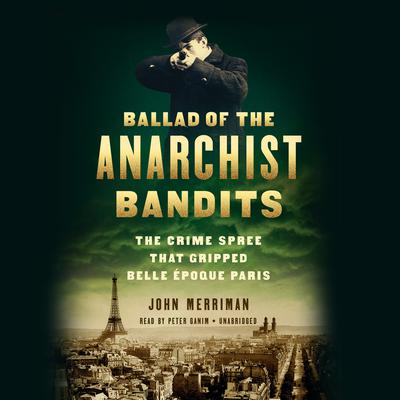 Ballad of the Anarchist Bandits: The Crime Spree that Gripped Belle Epoque Paris

Paris, 1911. Picasso, Debussy, and Proust were revolutionizing art, music, and literature. Electricity had transformed the City of Lights. And the Parisian elites were mad about their fancy new cars. The Belle Époque was well underway, yet it was not without incident. That year, Paris was gripped by a violent crime streak that obsessed and frightened its citizens. Before Bonnie and Clyde and John Dillinger, the Bonnot Gang, led by the coarse Jules Bonnot, captured the minds of a nation with their Robin Hood-esque capers. With guns blazing, the Bonnot Gang robbed banks and wealthy Parisians and killed anyone who got in their way in spectacularly cinematic fashion--all in the name of their particular brand of anarchism.

In Ballad of the Anarchist Bandits, John Merriman describes the Bonnot Gang's murderous tear and the Parisian police force's botched efforts to stop them. At the heart of the book are two anarchist idealists who wanted to find an alternative to Bonnot's crimes and the French government's unchecked violence. Victor Kibaltchiche and Rirette Maîtrejean met and fell in love at an anarchist rally, and together ran the radical Parisian newspaper L'Anarchie, which covered the Bonnot Gang with great sympathy. The couple and their anarchist friends occupied a world far apart from the opulent Paris of the Champs-Élysées. Their Paris was a vast city of impoverished workers who lived near bleak canals, cemeteries, and empty lots around smoky factories. Victor and Rirette found hope in radical politics, Bonnot and his gang in crime, but none could escape the full might of the French military. The lovers were arrested and imprisoned for their political views, Bonnot was murdered after an hours-long standoff with the police, and his gang was hunted down and sentenced to death by guillotine or lifelong imprisonment.

Ballad of the Anarchist Bandits is a classic tale of lost causes, tragic heroes, and the true costs of justice and revenge.

“With narrator Peter Ganim’s buttery smooth voice and excellent French pronunciations, the present day fades away, and early 1900s Paris comes alive. Ganim evokes images of a grand city teeming with artistic and industrial progress, then dispassionately describes in detail the hopeless plight of the lower-class workers. As a result, listeners can feel on a visceral level the dissonance between two versions of the same city.” —AudioFile
“Merriman’s subject is the rise and fall of the Bonnot Gang, but he shrewdly wraps his historical analysis in the arms of a love story.” —New York Times Book Review
“A Bonnie-and-Clyde story set in the heady Paris of a century ago, a Paris etched by Merriman with erudition, a fine eye for lively detail, and a lightness of touch.” —Adam Hochschild, New York Times bestselling author
“Merriman’s fresh look at the Bonnot gang, whose violent crime spree riveted and terrified Belle Époque Parisians, emphasizes the unforgiving socioeconomic inequalities of the era and the allure of anarchism to the desperate…The result is a lively, erudite work that, without romanticizing the Bonnot gang’s crimes, manages to humanize those in their milieu, and perhaps suggest lessons for the present.” —Booklist (starred review)
“Merriman uncovers the dark side of the famed Belle Époque…[A] revelatory history…of the dire consequences of inequality and injustice.” —Kirkus Reviews
“A gripping tale about fin-de-siècle Paris…Merriman has written an absorbing tragedy that also plumbs the history of radical politics in France.” —Robert Zaretsky, author of A Life Worth Living

John Merriman is the Charles Seymour Professor of History at Yale University and the author of several books, including Massacre: The Life and Death of the Paris Commune, The Dynamite Club: How a Bombing in Fin-de-Siècle Paris Ignited the Age of Modern Terror, and the classic History of Modern Europe. He is the recipient of Yale’s Byrnes/Sewell Teaching Prize and speaks frequently at universities across the United States, United Kingdom, France, and Australia.