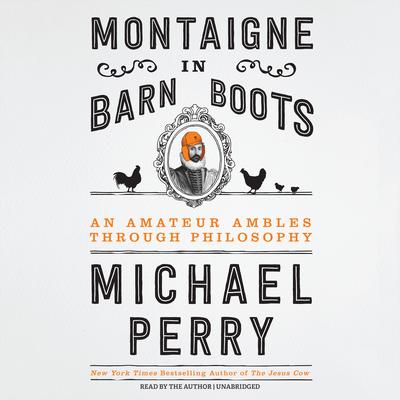 Montaigne in Barn Boots: An Amateur Ambles through Philosophy

“The journey began on a gurney,” writes Michael Perry, describing the debilitating kidney stone that led him to discover the essays of Michel de Montaigne. Reading the philosopher in a manner he equates to chickens pecking at scraps—including those eye-blinking moments when the bird gobbles something too big to swallow—Perry attempts to learn what he can (good and bad) about himself as compared to a long-dead French nobleman who began speaking Latin at the age of two, went to college instead of kindergarten, worked for kings, and once had an audience with the pope. Perry “matriculated as a barn-booted bumpkin who still marks a second-place finish in the sixth-grade spelling bee as an intellectual pinnacle … and once said hello to Merle Haggard on a golf cart.”

Written in a spirit of exploration rather than declaration, Montaigne in Barn Boots is a down-to-earth (how do you pronounce that last name?) look into the ideas of a philosopher “ensconced in a castle tower overlooking his vineyard,” channeled by a Midwestern American writing “in a room above the garage overlooking a defunct pig pen.” Whether grabbing an electrified fence, fighting fires, failing to fix a truck, or feeding chickens, Perry draws on each experience to explore subjects as diverse as faith, race, sex, aromatherapy, and Prince. But he also champions academics and aesthetics, in a book that ultimately emerges as a sincere, unflinching look at the vital need to be a better person and citizen.

“Would you enjoy listening for five hours to a Wisconsin volunteer fireman discoursing on a sixteenth-century French essayist? You bet. Michael Perry is a contemporary equivalent of the traditional American humorist exemplified by Mark Twain…who balances common sense with a droll, biting wit. Far from the wise yokels of old, Perry possess a voice and delivery that could easily fit the anchor’s chair of any major news network. He is funny and engaging, and he knows his stuff. These few hours really do tell you a great deal about Montaigne, and literature and philosophy, and firefighting, and a whole lot more that you wouldn’t think would be relevant or funny—but is. Winner of the AudioFile Earphones Award.” —AudioFile
“Michel de Montaigne may have created the essay form, but Michael Perry has perfected it. Readers will enjoy Perry’s astute meditations on life as he contemplates subjects as diverse as chickens, marriage, and kidney stones. Known for his trademark Midwestern wit and wisdom, Perry will have readers laughing out loud and then commenting on how profound he is. Well done!” —BookPulse
“This warm and humorous memoir…gives us a crash course in the life and ideas of Renaissance philosopher Michel de Montaigne…The author shares with his subject a congenital humility, combined with an openness to new ideas and ways of thinking. Readers will laugh out loud frequently while taking in this very funny memoir…One couldn’t hope for a better introduction to the work of Perry or Montaigne.” —Library Journal (starred review)
“Perry…[and] Michel de Montaigne…share thoughts on aging, anxiety, sex, and marriage…Both confront guilt, shame, faith, and death. The two writers are clearly long-lost comrades, separated by centuries.” —Booklist
“Perry’s refreshing candor, the essence of the personal essay, serves him well…Readers will learn plenty about Montaigne and more about Perry.” —Kirkus Reviews

Michael Perry is a humorist, radio host, songwriter, and the New York Times bestselling author of several nonfiction books, including Visiting Tom and Population 485. He lives in northern Wisconsin with his family.