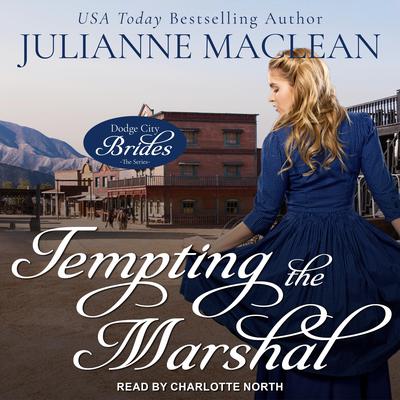 ALL SHE WANTS IS JUSTICE

Disguised as a man, Josephine O'Malley strolls into a Dodge City mercantile with one thing on her mind: to even the score with the man who murdered her husband. What she doesn't count on is Fletcher Collins—the handsome and irresistible new marshal in town—bursting through the doors of the mercantile with guns blazing . . . and a plan to stop her from pulling the trigger.

HE ONLY WANTS TO PROTECT HER

There's a new marshal in town, but he's fighting inner demons of his own. Fletcher Collins is a man who has known his share of heartache, and when he finds himself apprehending a gorgeous widow for murder, he begins to re-evaluate what it means to be a lawman. But if Fletcher is going to keep the widow out of prison—and figure out what's really going on in Dodge—he's going to have to learn how to follow his gut. Unfortunately his gut is telling him that Josephine O'Malley is exactly the kind of woman who could make him break all the rules . . .

Julianne MacLean is a USA Today bestselling author with degrees in English literature and business administration. Her many books include the American Heiress series and the Pembroke Palace series. She is a three-time RITA finalist and has won numerous awards, including the Booksellers’ Best Award, the Book Buyer’s Best Award, and the Reviewers’ Choice Award from Romantic Times for Best Regency Historical of 2005. She lives in Nova Scotia with her husband and daughter, and she is a dedicated member of Romance Writers of Atlantic Canada.