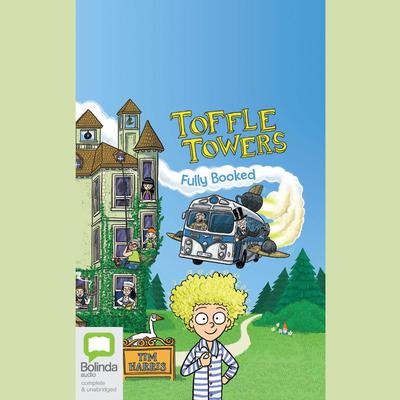 Toffle Towers hotel has been run by a Toffle for over one hundred years – and it’s about to be inherited by the next generation.

Chegwin Toffle is only ten years old. But he isn’t going to let that stop him from turning this run-down hotel into a success. Chegwin is determined to transform Toffle Towers from a boring hotel for grown-ups into an incredibly exciting destination for children (and their families).

But running a hotel isn’t easy. Chegwin has a lot to learn, and his tendency to drift off into daydreams isn’t helping.

Chegwin has plenty of ideas. But can he turn his madcap daydreams into reality?

Tim Harris is one of the most exciting children’s authors in Australia. His first series of books, Exploding Endings, will have primary-aged readers both captivated and laughing out loud. The first book in the series, Painted Dogs & Doom Cakes, was awarded Honour Book at the 2017 KOALAs. His second series, Mr Bambuckle’s Remarkables, contains his trademark quirkiness, mixed with a touch of poignancy. A former primary school teacher of 15 years, and advocate for creativity and short stories, Tim’s presentations and workshops are dynamic and entertaining. He is a sought-after presenter, having worked in over a hundred schools in 2016 and 2017 alone. Tim lives in Sydney with his wife and three young children.