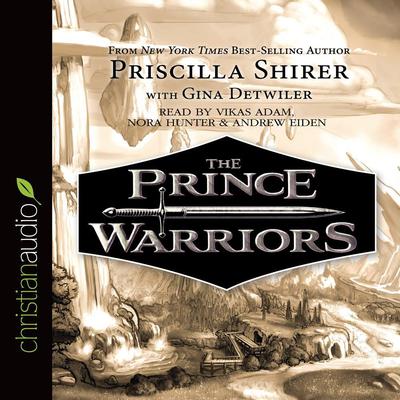 The battle is real.As brothers, Xavier and Evan are used to battling each other. But now they’re discovering that there is a much bigger battle going on all around them. And it’s their turn to fight. Based on Ephesians 6:10–18, The Prince Warriors is the first book in Priscilla Shirer’s epic new children’s series that brings to life the invisible struggle ensuing in the spiritual realm. Xavier, Evan, and their friends have typical lives until they enter a mysterious land called Ahoratos. There they meet their guide, Ruwach, who offers wisdom and direction as the kids’ initial adventure begins—an adventure filled with armor and danger and a very real enemy.Written by New York Times Best-Selling author Priscilla Shirer, The Prince Warriors series was created for middle-grade readers and will include the fiction trilogy as well as the 365 Prince Warriors Devotionaland app.

Priscilla Shirer is an author, Bible teacher, and conference speaker with a master’s degree in biblical studies from Dallas Theological Seminary. Her books include One in a Million and Life Interrupted. She is married to Jerry Shirer, with whom she founded Going Beyond Ministries. They have three sons and live in Dallas, Texas.

Vikas Adam is a classically trained actor with numerous credits in stage, film, commercials, and television, in addition to his over one hundred recorded audiobooks. An Audie Award nominee, he has garnered many awards for his narrations, including AudioFile Earphones Awards and various Best of the Year lists.

Nora Hunter has narrated several audiobooks, including The Ballad of Aramei by J. A. Redmerski and Beyond This Point Are Monsters by Margaret Miller. Her reading of One for the Murphys won her an AudioFile Earphones Award.