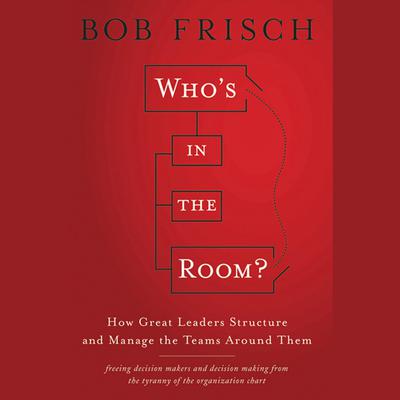 Who's in the Room?: How Great Leaders Structure and Manage the Teams Around Them

The inability to make decisions. Competition for resources. Friction among team members. These problems are endemic in organizations of all sizes, in all industries, across all continents. Leaders usually assume that if their teams can just communicate better, or trust each other more, or overcome some other set of individual or collective dysfunctions, these problems can be resolved.  And so they call in the psychologists, the coaches, and organization development consultants.  But the problems dont go away.  In fact, the problems often arent psychological or behavioral at all.  Rather, theyre caused by a failure to understand how managerial team building and decision-making actually work.  Through research and interviews with CEOs and top executives at major companies like MasterCard, DuPont and Morgan Stanley, the authors found that many leaders see themselves as leading not from the top of an organizational pyramid but from the center of several concentric rings of teams, both formal and informal, that surround them. This book shows how executives in organizations of any size can better configure, manage, and maximize their leverage of the formal and informal teams around them. Leaders will learn:  The best executives surround themselves with a portfolio of teams, not a single team consisting of their direct reports. These portfolios consist of a mix of formal teams and ad-hoc kitchen cabinets of close advisors. Ad-hoc teams often provide more value to leaders than their formal teams.  The Senior Management Team, often viewed as the top executive body of an organization, is often the most dysfunctional team of all - and how it can be fixed. The most effective CEOs surround themselves with four types of teams, each with specific functions that they are uniquely suited to fill. Providing clarity around roles and decision-making can be a more effective key to team success than putting more effort into team building. This book enables leaders and members of their teams to clarify roles and maximize strategic capability, generating faster, better decisions and a higher level of organizational alignment for improved results.

Bob Frisch is the managing partner of the Strategic Offsites Group and is considered among the world’s leading strategic facilitators. He is the author of Who’s in the Room? and frequently contributes to Bloomberg Businessweek and the Wall Street Journal. He lives in Boston.