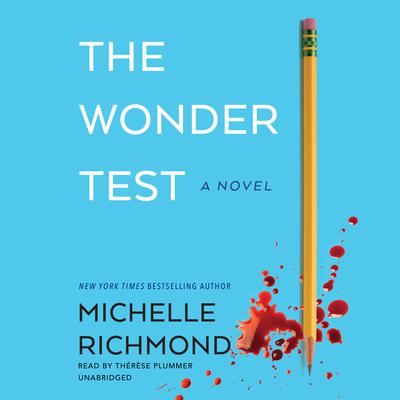 Escaping New York City and the espionage case that made her question everything, recently widowed FBI Agent Lina Connerly returns home to sell the house she has inherited in Greenfield, California. With her teenage son Rory, Lina hopes to reassemble her life, reevaluate her career, and find a clear way forward.

Adrift and battling insomnia, she discovers that her father’s sleepy hometown has been transformed into a Silicon Valley suburb on steroids, obsessed with an annual exam called the Wonder Test.

The Wonder Test is a searing view of a culture that puts the well-being of children at risk for advancement and prestige, and a captivating story of the lengths a mother will go for her son.

“Gripping, frightening, swift as a bullet. The last hundred pages could give you whiplash.” —Dean Koontz, #1 New York Times bestselling author
“Captures the darker aspects of being the extremely privileged cyber capital of the world.” —Alice LaPlante, New York Times bestselling author
“A moving exploration of motherhood and money, danger and deception, privilege and pretense.” —Joshilyn Jackson, New York Times bestselling author
“Fast-paced and smart.” —Amanda Eyre Ward, New York Times bestselling author
“Richmond crafts a satisfying ending…[with] gifted storytelling and Lina’s compelling self-discovery.” —Booklist (starred review)
“[A] sharply written, subtly satirical thriller.” —Publishers Weekly
“Narrator Therese Plummer leads listeners through a twisted thriller… Plummer portrays Lina as a combination of serious FBI agent and concerned mother. Her well-performed narration keeps the listener engaged from the beginning to the truly surprising conclusion.” —AudioFile
“The overlay of international spy craft on suburban California…is surprisingly effective. Richmond also has fun by including a question from the Wonder Test at the beginning of each chapter, emphasizing the ridiculously competitive world of affluent high schools.” —Kirkus Reviews
“A two-in-one winner: a gripping thriller set in a Stepford-esque California suburb and a story of surviving loss and building family bonds. With a realistic protagonist, well-described setting, and an uber-creepy villain.” —Library Journal
“The plot twists kept me riveted until the small hours of the morning.” —Vendela Vida, author of We Run the Tides