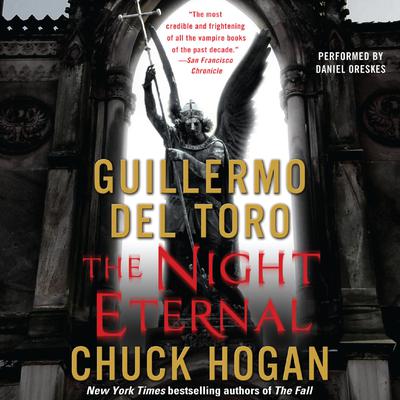 Nuclear Winter blankets the land, darkening the Earth for twenty-three hours a day—the perfect environment for vampires. In control of the planet, they have subjugated the defeated humans. Interred in vast camps across the world, herded like livestock, they are farmed and harvested for the sustenance and pleasure of the Master Race.

But not all have been contained. A ragtag network of humans roams free, continuing the desperate resistance. Among them are Eph, the brilliant scientist and head of the CDC’s team who first discovered the vampires; Vasiliy Fet, the colorful exterminator; and Gus, the former gangbanger with a special talent for dispatching the undead. They are determined to disrupt the devastating new world order and battle the Master and his minions at every turn. Yet they cannot do it alone.

As the final battle dawns, the group’s only hope is the intervention of an unexpected race of beings—avenging “angels”—who arrive to help them defeat the vampires and reclaim the planet for humanity.

Guillermo del Toro is an Academy Award–winning film director as well as a screenwriter, producer, and New York Times bestselling novelist. He is best known for his foreign fantasy films, especially Pan’s Labyrinth, and American mainstream movies like The Shape of Water. Del Toro has published multiple bestselling adult novels, including The Strain, which was adapted into a TV series by FX.

Chuck Hogan was a video store clerk in Boston when his first thriller, The Standoff, was published to critical acclaim and went on to become a national bestseller translated into fourteen international editions. He subsequently wrote three additional suspense novels, The Blood Artists, The Killing Moon, and the acclaimed Prince of Thieves. The Blood Artist and The Killing Moon each blended thrills with chills, while Prince of Thieves won the Hammett award for excellence in crime writing and was proclaimed by Steven King to be one of the best novels of the year. In 2010 Prince of Thieves was adapted into a major motion picture.