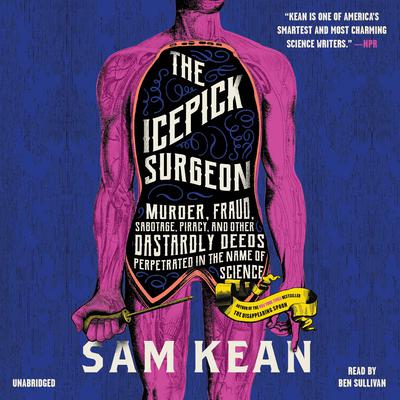 The Icepick Surgeon: Murder, Fraud, Sabotage, Piracy, and Other Dastardly Deeds Perpetrated in the Name of Science

Science is a force for good in the world—at least usually. But sometimes, when obsession gets the better of scientists, they twist a noble pursuit into something sinister. Under this spell, knowledge isn’t everything, it’s the only thing—no matter the cost. Bestselling author Sam Kean tells the true story of what happens when unfettered ambition pushes otherwise rational men and women to cross the line in the name of science, trampling ethical boundaries and often committing crimes in the process.

The Icepick Surgeon masterfully guides the reader across two thousand years of history, beginning with Cleopatra’s dark deeds in ancient Egypt. The book reveals the origins of much of modern science in the transatlantic slave trade of the 1700s, as well as Thomas Edison’s mercenary support of the electric chair and the warped logic of the spies who infiltrated the Manhattan Project. But the sins of science aren’t all safely buried in the past. Many of them, Kean reminds us, still affect us today. We can draw direct lines from the medical abuses of Tuskegee and Nazi Germany to current vaccine hesitancy, and connect icepick lobotomies from the 1950s to the contemporary failings of mental-health care. Kean even takes us into the future, when advanced computers and genetic engineering could unleash whole new ways to do one another wrong.

Unflinching, and exhilarating to the last page, The Icepick Surgeon fuses the drama of scientific discovery with the illicit thrill of a true-crime tale. With his trademark wit and precision, Kean shows that, while science has done more good than harm in the world, rogue scientists do exist, and when we sacrifice morals for progress, we often end up with neither.

Sam Kean is a gifted storyteller with a knack for finding the magic hidden in the everyday. —Daniel H. Pink, author of the #1 New York Times bestseller Drive
The best science writers bring an enthusiasm for the material that infects those of us who wouldn’t usually give a flying proton. Kean unpacks the periodic table’s bag of tricks with such aplomb and fascination that material normally as heavy as lead transmutes into gold. With the anecdotal flourishes of Oliver Sacks and the populist accessibility of Malcolm Gladwell, Kean succeeds in giving us the cold hard facts, both human and chemical, behind the astounding phenomena without sacrificing any of the wonder. —Entertainment Weekly
Science is made fun whenever Sam Kean is narrating. —Susannah Cahalan, author of the #1 New York Times bestseller Brain on Fire
Kean crams his books full of wild yarns told with humorously dramatic flair . . . The effect is oddly intimate, the way all good storytelling is—you feel like you’re sharing moments of geeky amusement with a particularly hip chemistry teacher. —San Francisco Chronicle
Kean is one of America's smartest and most charming science writers. —NPR
[An] interesting discussion of the meaning of true progress and its cost is a thoughtful look through history and into the future. —Cassie Gutman, Bookriot
“Fascinating…What makes his subjects unique in the annals of crime is that they did wrong ‘for data—to augment our understanding of the world.’ This engrossing look at crimes often committed by otherwise moral people deserves a wide readership." —Publishers Weekly (starred review)
“Narrator Ben Sullivan’s strong, clear voice and intentional pacing complement these tales of scientific misdeeds perfectly…Sullivan’s straightforward narration of these unbelievable events will remind listeners of where the road of supposedly good intentions leads.” —AudioFile
[A] witty, thought-provoking book... Kean is a powerful, exciting storyteller who deftly considers ethical questions within an engaging narrative. —Library Journal (starred review)
Kean [has a] gift for making science understandable. His writing style is conversational and witty—but he never forgets the real human costs of these crimes. —Deborah Mason, Bookpage
“[A] witty, thought-provoking book…Kean is a powerful, exciting storyteller who deftly considers ethical questions within an engaging narrative.” —Library Journal (starred review)

Sam Kean is the author of several books, including the New York Times bestseller The Disappearing Spoon. He is also a two-time finalist for the PEN/E. O. Wilson Literary Science Writing Award. His work has appeared in The Best American Science and Nature Writing, The New Yorker, The Atlantic, and the New York Times Magazine, among other publications, and he has been featured on NPR’s Radiolab, All Things Considered, Science Friday, and Fresh Air. His podcast, The Disappearing Spoon, debuted at #1 on the iTunes science charts.