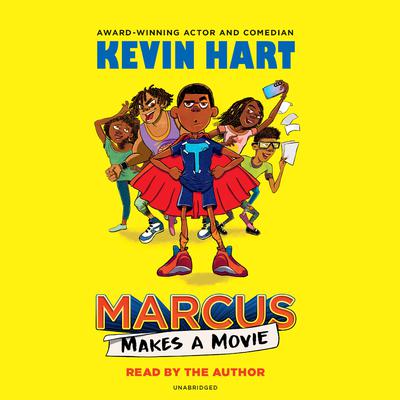 Stand-up comedian and Hollywood box-office hit Kevin Hart keeps the laughs coming in a middle-grade novel about a boy who has big dreams of making a blockbuster superhero film. Perfect for readers of James Patterson's Middle School series and Lincoln Peirce's Big Nate series.   Marcus is NOT happy to be stuck in after-school film class . . . until he realizes he can turn the story of the cartoon superhero he’s been drawing for years into an actual MOVIE! There’s just one problem: he has no idea what he’s doing. So he’ll need help, from his friends, his teachers, Sierra, the strong-willed classmate with creative dreams of her own, even Tyrell, the local bully who’d be a perfect movie villain if he weren’t too terrifying to talk to. Making this movie won’t be easy. But as Marcus discovers, nothing great ever is—and if you want your dream to come true, you’ve got to put in the hustle to make it happen.  Comedy superstar Kevin Hart teams up with award-winning author Geoff Rodkey and lauded illustrator David Cooper for a hilarious and inspiring story about bringing your creative goals to life and never giving up, even when nothing’s going your way.

Kevin Hart is an award-winning actor and comedian. His films, including Central Intelligence, Think Like a Man, Get Hard, Ride Along, The Wedding Ringer, and The Secret Life of Pets have earned over $3.5 billion at the box office. His stand-up comedy tours, including Let Me Explain, Laugh at My Pain, and What Now?, have sold out arenas and football stadiums, leading Forbes to name him the “king of comedy.” He is also the first comedian with a Nike sneaker line; a television producer, creating the BET show Real Husbands of Hollywood and the Laugh Out Loud Network; and CEO of Hartbeat Productions.