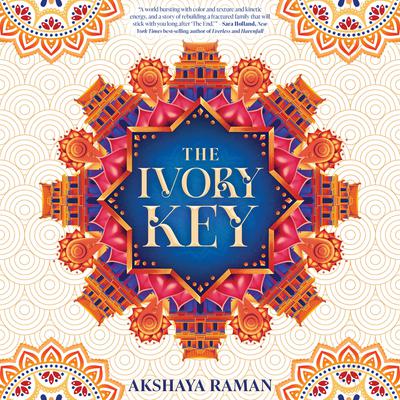 In this epic YA fantasy, magic, a prized resource, is the only thing between peace and war. When magic runs out, four estranged royal siblings must find a new source before their country is swallowed by invading forces.

Vira, Ronak, Kaleb, and Riya may be siblings, but they've never been close or even liked each other. Torn apart by the different paths their lives have taken, only one thing can bring them back together: the search for the Ivory Key, a thing of legend that will lead the way to a new source of magic. Magic is Ashoka's biggest export and the only thing standing between them and war with the neighboring kingdoms—as long as their enemies don't find out that the magic mines are nearly depleted.

The siblings all have something to gain from finding the Ivory Key and even more to lose if they don't. For Vira, the Ivory Key is the only way to live up to the legacy of her mother, the beloved former maharani. Ronak plans to get out of his impending political marriage by selling the Ivory Key to the highest bidder. Kaleb has been falsely accused of assassinating the former maharani, and this is the only way to clear his name. And Riya needs to prove her loyalty to the Ravens, the group of rebels that wants to take control away from the maharani and give it to the people.

With each sibling harboring secrets and conflicting agendas, figuring out a way to work together may be the most difficult task of all. And in a quest this dangerous, working together is the only way to survive.

“A rich world, a satisfying slow burn romance, and a main character determined to forge her own path make this series a must read.” —Adrienne Young, New York Times bestselling author
“The Ivory Key is a twisty, dazzling adventure that I absolutely fell in love with.” ­­ —Tasha Suri, author of The Books of Ambha duology