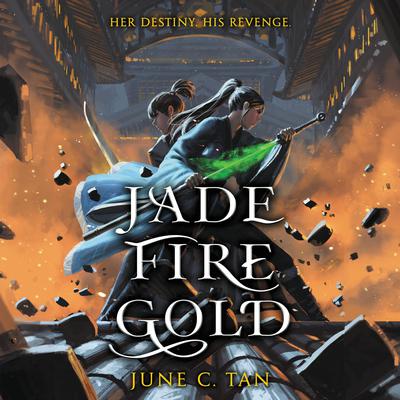 A Bookpage Most Anticipated Book of Fall

Ahn is no one, with no past and no family.

Altan is a lost heir, his future stolen away as a child.

When they meet, Altan sees in Ahn a path to reclaiming the throne. Ahn sees a way to finally unlock her past and understand her lethal magical abilities.

But they may have to pay a far deadlier price than either could have imagined.

A stunning homage to the Xianxia novel with dangerous magic, fast-paced action, and a delightful  romance, Jade Fire Gold isn’t one to miss!

“An addictive story that is impossible to put down."   —Swati Teerdhala, author of The Tiger at Midnight series

"Adventure at its finest. A beautifully rendered story that honors the great wuxia epics.” —Joan He, author of Descendant of the Crane and The Ones We're Meant to Find

“An epic adventure!” —Elizabeth Lim, New York Times bestselling author of Spin the Dawn and So This Is Love

“Epic in every sense of the word, beautiful as it is sweeping." —Roseanne A. Brown, New York Times bestselling author of A Song of Wraiths and Ruin

“Epic in every sense of the word, beautiful as it is sweeping.” —Roseanne A. Brown, New York Times bestselling author
“This debut fantasy will be catnip for YA readers who love expansive, immersive world building, slow burns, reluctant allies, and character-driven fantasy.” —BookPage