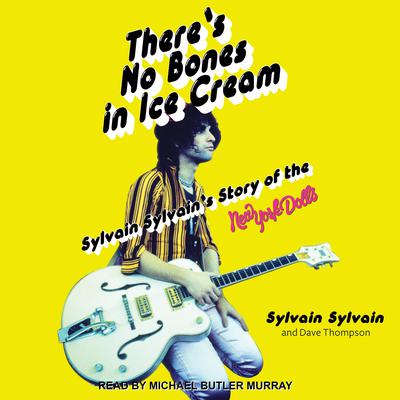 There's No Bones in Ice Cream by Sylvain Sylvain is the inside story of glam heroes the New York Dolls—outrageous, defiant, sleaze kings, transgender posers, drug casualties, and victims, not just of their own excess but of an unsympathetic music industry that simply didn't know how to process them. Sylvain, one of only two surviving members of the original New York Dolls, offers a fly-on-the-wall, sincere and often hilarious account of the rise and fall of the Dolls, the group that flew so close to the sun that they exploded in a fireball that lit the touch paper under punk rock.

Though their brief, sensation-filled yet doomed career produced just two albums, the Dolls exerted an influence on rock that changed it forever. A cross between the Rolling Stones and the Sex Pistols, the Dolls became the link in the chain between them, offering a crash course in mischief, cross-dressing, and anarchy, but like unheralded prophets of Biblical times they were cast aside until the world finally caught up.

"Other people turned the New York Dolls into legends. We just went along for the ride."

Dave Thompson is the author of over 150 books, including co-written memoirs with New York Doll, Sylvain Sylvain, Motown legends Brian and Eddie Holland, Hawkwind’s Nik Turner, the Yardbirds’s Jim McCarty, Fairport Convention’s Judy Dyble, and more. A columnist for Goldmine magazine, his work has also appeared in Rolling Stone, Alternative Press, Mojo, Record Collector, and many other major publications. He has contributed to music documentaries produced by VH1, A&E, the BBC, and others. Born in the UK, Thompson is now a resident of Delaware, USA.