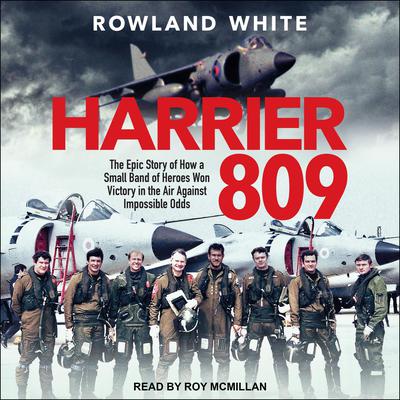 Harrier 809: The Epic Story of How a Small Band of Heroes Won Victory in the Air Against Impossible Odds

In response, Britain dispatches a naval Task Force. Eight thousand miles from home, its fate hinges on just twenty Sea Harrier fighters against the two hundred-strong might of the Argentine Air Force.

The odds against them are overwhelming.

British Defense Chiefs' own estimates suggest that half the Harriers will be lost within a week. Against this background, 809 Naval Air Squadron is reformed, trained and sent south to fight.

Not since WWII had so much been expected of such a small band of pilots . . .

Combining groundbreaking research with the pace of a thriller, Rowland White reveals the full story of the fleet's knife-edge fight for survival for the first time, and shows how the little jump jet went from airshow novelty to writing its name in aviation legend. And of how a small band of heroes won victory against impossible odds.

Rowland White is a British author whosefirst book, Vulcan 607, was published by Bantam Press in 2006. It was followed in 2009 by Phoenix Squadron and, in 2010, Storm Front, about the Dhofar War in Oman in the early seventies. All three were Sunday Times top-ten bestsellers and are now available in paperback and ebook.

His writing has appeared British national newspapers including the Guardian, Daily Mail and The Sun, Esquire magazine, and a wide range of aviation magazines including Aeroplane Monthly, Fly Past and Aircraft Illustrated. A documentary based on Vulcan 607 called Falklands’ Most Daring Raid was shown on Channel 4 in March 2012.