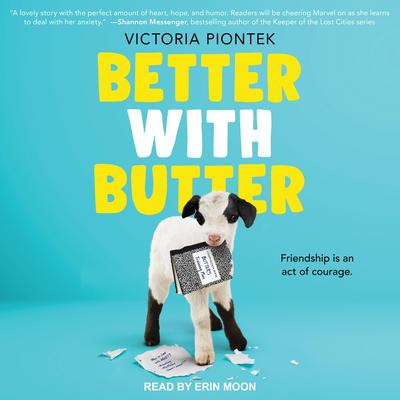 Twelve-year-old Marvel is afraid of absolutely everything—amusement park rides, food poisoning, earthquakes, and that big island of plastic floating through the ocean. She also obsesses about smaller worries like making friends, getting called on by the teacher, and walking home alone. Her parents and the school therapist call her worries an anxiety disorder, but Marvel calls them armor. If something can happen, it will. She needs to be prepared.

But when Marvel stumbles on a group of older kids teasing a baby goat that has mysteriously shown up on the soccer field, she momentarily forgets to be afraid and rescues the frightened animal. Only Butter isn't any old goat. She's a fainting goat. When Butter feels panic, she freezes up and falls over. Marvel knows exactly how Butter feels and precisely what Butter needs—her.

Soon, the two are inseparable, and Butter thrives under Marvel's support. But Butter also helps Marvel. Everything is better with Butter by her side, and Marvel starts to imagine a life in which she doesn’t have to be so afraid . . . until she's told she might have to give up Butter forever. Will Marvel find a way to fight for her friend? Or will she revert back to the anxious, lonely person she used to be?