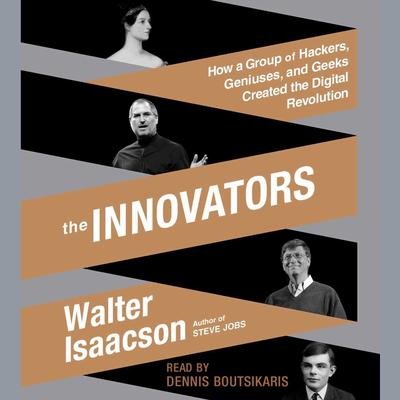 The Innovators: How a Group of Hackers, Geniuses, and Geeks Created the Digital Revolution

Nominated for the 2015 Audie Award for Nonfiction

One of Audible’s Best Audiobooks of 2014: Science and technology

A Publishers Weekly Pick of the Week, October 2014

An Amazon Best Book of the Month, October 2014

Following his blockbuster biography of Steve Jobs, Walter Isaacson’s New York Times bestselling and critically acclaimed The Innovators is a “riveting, propulsive, and at times deeply moving” (The Atlantic) story of the people who created the computer and the Internet.

What were the talents that allowed certain inventors and entrepreneurs to turn their visionary ideas into disruptive realities? What led to their creative leaps? Why did some succeed and others fail?

This is the story of how their minds worked and what made them so inventive. It’s also a narrative of how their ability to collaborate and master the art of teamwork made them even more creative. For an era that seeks to foster innovation, creativity, and teamwork, The Innovators is “a sweeping and surprisingly tenderhearted history of the digital age” (The New York Times).

“The history of the computer as told through this fascinating book is not the story of great leaps forward but rather one of halting progress…Isaacson’s absorbing study shows that technological progress is a team sport, and that there’s no I in computer.” —Publishers Weekly (starred review)
“A panoramic history of technological revolution…Isaacson weaves prodigious research and deftly crafted anecdotes into a vigorous, gripping narrative about the visionaries whose imaginations and zeal continue to transform our lives.” —Kirkus Reviews (starred review)
“[Boutsikaris’] reading reveals a rich palette of emotional accents that he applies to great effect in all the right places. His skill with the subtleties of narrative energy also work well with this textured history lesson…With one fascinating story after the other, this highly entertaining audio chronicles the importance of collaboration as much as individual creativity among the colorful pioneers who brought us today’s digital world.” —AudioFile
“Walter Isaacson has written an inspiring book about genius, this time explaining how creativity and success come from collaboration. The Innovators is a fascinating history of the digital revolution, including the critical but often forgotten role women played from the beginning. It offers truly valuable lessons in how to work together to achieve great results.” —Sheryl Sandberg

Walter Isaacson is the author of highly acclaimed works of nonfiction, including four biographies that have made the #1 spot on the New York Times bestsellers list. A professor of history at Tulane University, he has been CEO of the Aspen Institute, chair of CNN, and editor of Time. Visit him at Isaacson.Tulane.edu.