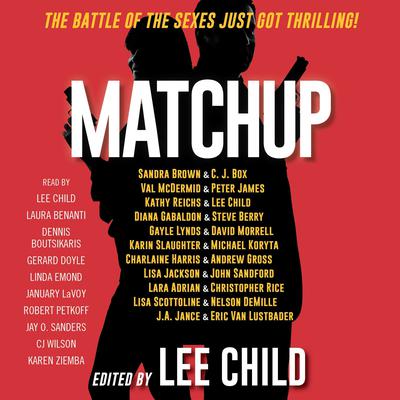 This “highly recommended” (Publishers Weekly, starred review) collection edited by New York Times bestselling author Lee Child pairs the beloved characters of twenty-two internationally bestselling writers in “a must-read for fans of the thriller genre. Very rarely does this kind of star power assemble for one anthology, and each story delivers the goods” (The Real Book Spy).

The incredible follow-up to FaceOff features twenty-two of the world’s bestselling and critically acclaimed thriller writers pairing their series characters in an eleven-story anthology curated by the International Thriller Writers (ITW). MatchUp takes the never-before-seen bestseller pairings of FaceOff and adds a delicious new twist: gender. “Think Dancing With the Stars, but with mysteries” (Booklist) as eleven of the world’s best female thriller writers from Diana Gabaldon to Kathy Reichs to Charlaine Harris are paired with eleven of the world’s best male thriller writers, including John Sandford, C.J. Box, and Nelson DeMille, among others. “This box holds a chocolate or two that will be to everyone’s liking” (Kirkus Reviews).

In these innovative stories, their beloved protagonists, Lee Coburn, Joe Pickett, and Jack Reacher—just to name a few—team up to unnerve and satisfy thriller fans worldwide. All of the contributors are ITW members, and the project is edited by ITW member and #1 New York Times bestselling author Lee Child. The lineup includes:

David Morrell is one of America’s most popular and acclaimed storytellers, with more than eighteen million copies of his books in print. His thrillers have been translated into twenty-two languages and turned into record-breaking films and top-rated television miniseries. His 1972 debut novel, First Blood, became the basis for the Rambo films. A former professor of American literature at the University of Iowa, he now lives in Santa Fe, New Mexico.

Andrew Gross is the author of the New York Times bestseller The Blue Zone and The Dark Tide and coauthor with James Patterson of five number-one bestsellers. He has degrees from Middlebury College and Columbia University and lives in Westchester County, New York, with his wife Lynn. They have three children.

Peter James is the international bestselling author of the Roy Grace series with more than thirteen million copies sold all over the world. His novels have been translated into thirty-four languages and three have been filmed. All his novels reflect his deep interest in the world of the police, with whom he does in-depth research. He lives in England.

Diana Gabaldon is the beloved author of the New York Times bestselling novels in the Outlander series. She is a recipient of the RT Award for Best Innovative Historical Romance.

Karin Slaughter is the New York Times and #1 internationally bestselling author of over a dozen thrillers, including the Will Trent and Grant County series. A longtime resident of Atlanta, she splits her time between the kitchen and the living room.

Lisa Jackson is the New York Times bestselling author of mysteries, romance, and romantic suspense novels. More than sixty of her books have been published and reprinted in a twenty foreign languages.

Nelson Richard DeMille, a #1 New York Times bestselling author, was born in New York City. He was a first lieutenant in the United States Army (1966–69) and saw action as an infantry platoon leader with the First Cavalry Division in Vietnam. His first major novel, By the Rivers of Babylon, is still in print, as are all his succeeding novels. He attended Hofstra University, where he received a degree in political science and history. He is the author of By the Rivers of Babylon, Cathedral, The Talbot Odyssey, Word of Honor, The Charm School, The Gold Coast, The General’s Daughter, Spencerville, Plum Island, The Lion’s Game, Up Country, The Gate House, Night Fall, Wild Fire, and The Lion. He also coauthored Mayday with Thomas Block and has contributed short stories, book reviews, and articles to magazines and newspapers. A member of the Authors Guild, the Mystery Writers of America, and American Mensa, he holds honorary doctorates from Hofstra University, Long Island University, and Dowling College.