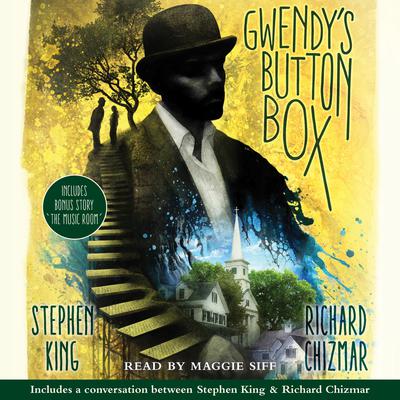 By Stephen King  and  Richard Chizmar
Read by Maggie Siff

Set in the fictional town of Castle Rock, Maine

Stephen King teams up with long-time friend and award-winning author Richard Chizmar for the first time in this original, chilling novella that revisits the mysterious town of Castle Rock.

There are three ways up to Castle View from the town of Castle Rock: Route 117, Pleasant Road, and the Suicide Stairs. Every day in the summer of 1974, twelve-year-old Gwendy Peterson has taken the stairs, which are held by strong—if time-rusted—iron bolts and zig-zag up the precarious cliffside.

Then one day when Gwendy gets to the top of Castle View, after catching her breath and hearing the shouts of kids on the playground below, a stranger calls to her. There on a bench in the shade sits a man in black jeans, a black coat, and a white shirt unbuttoned at the top. On his head is a small, neat black hat. The time will come when Gwendy has nightmares about that hat…

The little town of Castle Rock, Maine has witnessed some strange events and unusual visitors over the years, but there is one story that has never been told—until now.

“Maggie Siff narrates with touches of nostalgia, wonder, and insecurity that beautifully capture Gwendy’s adolescence. Though the horror elements are effective, it’s Gwendy’s coming-of-age that truly resonates. Siff characterizes Farris as blandly likable but with intangible menace—listeners, like Gwendy, will be both wary and intrigued. In the bonus short story, ‘The Music Room,’ Siff’s highfalutin accents perfectly complement the story’s mix of black humor and wickedness. Winner of the AudioFile Earphones Award.” —AudioFile
“Actor Siff adds dramatic flair to her reading…Siff captures the innocence of the young girl met at the beginning of the story and the more mature and worldly young woman at the end. Secondary characters are diverse and well rendered, each given unique voices of their own. But Siff shines with her portrayal of the enigmatic Mr. Farris, whose croaky voice steals every scene he’s in.” —Publishers Weekly (audio review)
“With the help of award-winning author Chizmar, Castle Rock reveals one of its best secrets yet…Readers will eagerly devour this thought-provoking, satisfying tale, even as it leaves them unsettled…King has plenty of teen fans already, and this latest, with its teenage protagonist and thought-provoking coming-of-age themes, is a particularly excellent option.” —Booklist (starred review)
“This bite-size gem of a story packs quite a punch, and the only complaint readers will likely have is that it isn’t longer.” —Publishers Weekly

Richard Chizmar is the founder/publisher of Cemetery Dance magazine and the Cemetery Dance Publications book imprint. He has edited more than thirty anthologies and his fiction has appeared in dozens of publications. He has won two World Fantasy awards, four International Horror Guild awards, and the HWA’s Board of Trustee’s award.