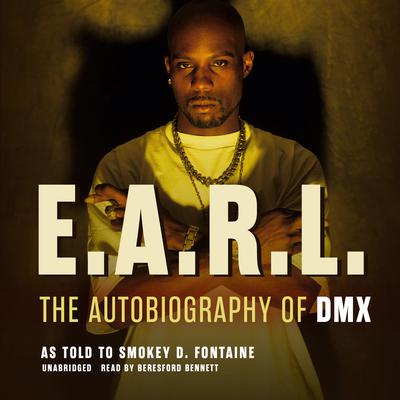 E.A.R.L.: The Autobiography of DMX

By DMX
As told to Smokey D. Fontaine
Read by Beresford Bennett

Raised in the ghetto, abandoned as a child, addicted to drugs and women all his life but still able to produce four consecutive #1 hip-hop albums in a row … this is the life and times of the darkest and most dangerously introspective hip-hop artist ever—at the height of his career and completely uncensored.

His real name was Earl Simmons. As a child he placed higher on tests than his fellow students, and liked to spend mornings with his mother and sisters playing games and making pancakes. But for young Earl—a boy growing up on the streets of Yonkers, New York—that kind of childhood didn’t last long. Beatings, abuse, and neglect very soon had him moving on to other things, like robbing, stealing, drugs, and, eventually, jail. Along the way, however, he found a talent and a passion for rhyme.

After twenty-seven years of chaos, struggle, and survival, DMX became one of the biggest stories in contemporary music. But his character goes beyond that. He was also a father, a husband, and more important, someone who never gave up and never stopped chasing his dreams. He dedicated his life and his music to expressing the thoughts and feelings of those who have never been heard before—just as he was never heard as a child.

“Earl Simmons’s true-life story makes 8 Mile seem like an after-school special” —Vibe
“As successful as his best recordings…this is a painfully honest account of how one individual overcame a ‘lifetime of suffering’ by discovering and believing in his lyric talent.” —Publisher’s Weekly

Earl Simmons, also known as DMX (1970–2021), was an American rapper, songwriter, and actor.  Raised in the ghetto, abandoned as a child, and addicted to drugs and women all his life, DMX overcame all obstacles to produce four consecutive #1 hip-hop albums.