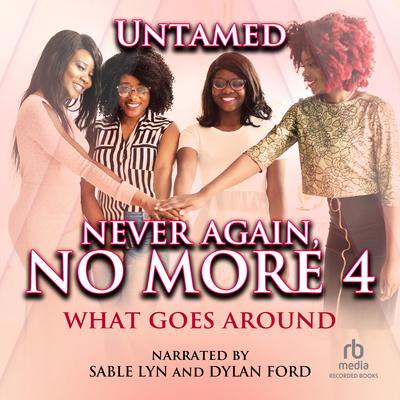 Never Again, No More 4: What Goes Around

Never Again, No More 4 explodes with secrets and lies that begin unraveling from one character to the next, showcasing what goes around, truly comes around again.

As Pooch works tirelessly to realign the Dope Boy Clique from prison, Trinity and Terrence seem to be falling apart at the seams. Trinity wonders if Terrence is truly the man she thought he was, and Terrence begins to question Trinity’s actions around those closest to him. Although they love each other, are they right for each other? Unknowingly, they must brace themselves for the wrath of Pooch.

Life has moved on for LaMeka. She has the career and the new man she’s always wanted. Gavin is playing for keeps, but Tony is alive and well. With a new lease on life, he wants his family back and will do whatever it takes to remove Gavin from the picture.

Lucinda struggles to adapt to the new normal of her stepdaughter, Jessica, and Aldris’ ex-fiancée, Jennifer. Admittedly, Aldris doesn't make the transition easy, and as Jennifer and Aldris get close again, it causes a rift between Lucinda and Aldris. When Lucinda finds solace in an unexpected friend, Aldris is left struggling to keep his blended family together.

After Lincoln shows up and wreaks havoc for Charice and Ryan, it’s Ryan who’s left having to correct his errors to make his wife happy again. However, the secret they are withholding about the paternity of their baby may be the one thing that rips this perfect union to shreds.

Untamed is an author best known for her gritty yet flavorful language through real-life, every day stories with highly animated and lifelike characters. Her work has been featured in several print ads, and she has been interviewed on NTUNED Radio Show, the Poetic Soul Talk Show, and PD Radio. In 2015, she released a poetry book entitled This Side of Heaven; A Poetic Journey of Strength and Survival for which all proceeds are donated to M.A.D.D. (Mothers Against Drunk Driving).