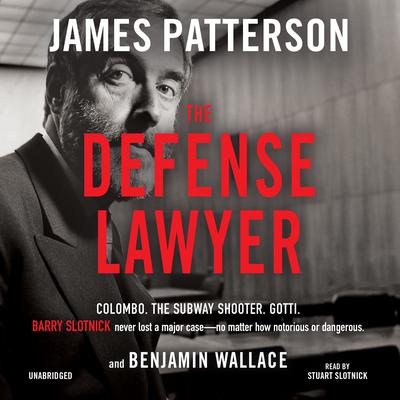 By James Patterson  and Benjamin Wallace
Read by Stuart Slotnick

Everyone deserves the best defense.

Known for his sharp mind, sharp suits, and bold courtroom strategies, Bronx-native Bernard Slotnick is known as the best criminal lawyer in the US.

He calls himself “Liberty’s Last Champion.”

His unparalleled legal brilliance defines a profession, a city—and an era.

Benjamin Wallace has written for a number of major publications, including GQ, Details, Food & Wine, Salon, and Washington Post. He graduated from Georgetown University and has spent time teaching English in Hungary and the Czech Republic and proofreading diplomatic documents at the Czechoslovak Ministry of Foreign Affairs. The Billionaire’s Vinegar is his first book, which received widespread acclaim. He lives in Brooklyn, New York.