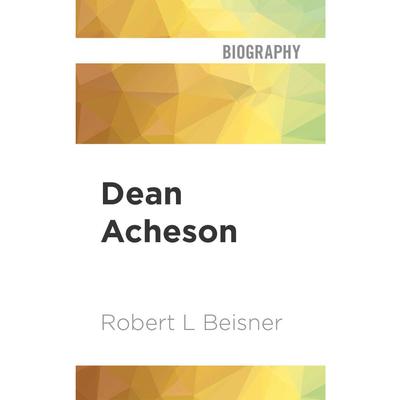 Dean Acheson: A Life in the Cold War

Dean Acheson was one of the most influential Secretaries of State in U.S. history, presiding over American foreign policy during a pivotal era—the decade after World War II when the American Century slipped into high gear. During his vastly influential career, Acheson spearheaded the greatest foreign policy achievements in modern times, ranging from the Marshall Plan to the establishment of NATO.

In this acclaimed biography, Robert L. Beisner paints an indelible portrait of one of the key figures of the last half-century. In a book filled with insight based on research in government archives, memoirs, letters, and diaries, Beisner illuminates Acheson's major triumphs, including the highly underrated achievement of converting West Germany and Japan from mortal enemies to prized allies, and does not shy away from examining his missteps. But underlying all his actions, Beisner shows, was a tough-minded determination to outmatch the strength of the Soviet bloc—indeed, to defeat the Soviet Union at every turn. The book also sheds light on Acheson's friendship with Truman—one, a bourbon-drinking Midwesterner with a homespun disposition, the other, a mustachioed Connecticut dandy who preferred perfect martinis.

Over six foot tall, with steel blue, "merry, searching eyes" and a "wolfish" grin, Dean Acheson was an unforgettable character—intellectually brilliant, always debonair, and tough as tempered steel. This lustrous portrait of an immensely accomplished and colorful life is the epitome of the biographer's art.