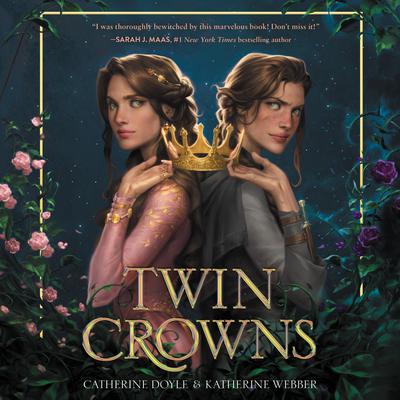 A high-stakes fantasy rom-com about twin princesses separated at birth—one raised as the crown princess, and the other taken as an infant and raised to kidnap her sister, steal the crown, and avenge the parents' murders—the first novel in a new YA duology from bestselling UK authors Catherine Doyle and Katherine Webber. Perfect for fans of The Selection, My Lady Jane, and Caraval.

Wren Greenrock has always known that one day she would steal her sister’s place in the palace. Trained from birth to return to the place of her parents’ murder and usurp the only survivor, she will do anything to rise to power and protect the community of witches she loves. Or she would, if only a certain palace guard wasn’t quite so distractingly attractive, and if her reckless magic didn’t have a habit of causing trouble…

Princess Rose Valhart knows that with power comes responsibility. Marriage into a brutal kingdom awaits, and she will not let a small matter like waking up in the middle of the desert in the company of an extremely impertinent (and handsome) kidnapper get in the way of her royal duty. But life outside the palace walls is wilder and more beautiful than she ever imagined, and the witches she has long feared might turn out to be the family she never knew she was missing.

Two sisters separated at birth and raised into entirely different worlds are about to get to know each other’s lives a whole lot better. But as coronation day looms closer and they each strive to claim their birthright, the sinister Kingsbreath, Willem Rathborne, becomes increasingly determined that neither will succeed. Who will ultimately rise to power and wear the crown?

Catherine Doyle lives in the west of Ireland. She holds a bachelor’s degree in psychology and a master’s degree in English from the National University of Ireland, Galway. Vendetta is her first novel.