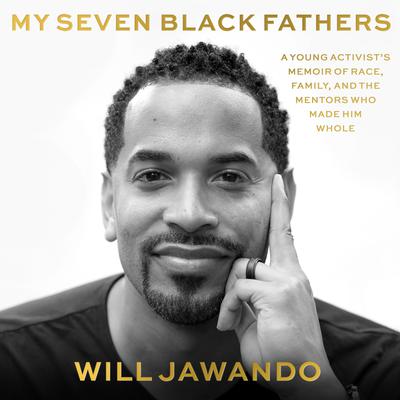 My Seven Black Fathers: The Men Who Made Me Whole

“Will Jawando’s account of mentorship, service, and healing lays waste to the racist stereotype of the absent Black father. By arguing that Black fathers are not just found in individual families, but are indeed the treasure of entire Black communities, Will makes the case for a bold idea: that Black men can counter racist ideas and policies by virtue of their presence in the lives of Black boys and young men. This is a story we need to hear.” ―New York Times–bestselling author Ibram X. Kendi

My Seven Black Fathers: The Men Who Made Me Whole is a call to action for Black men to step forward and mentor Black boys. Will Jawando is the beneficiary of such mentoring. He calls himself the proud son of not one but seven Black fathers―all of them men who changed the course of his life.

As a boy, Will, who went by his Nigerian name Yemi, felt awkward and alone as he was shunted from school to school in suburban Maryland. His mother was divorced, his relationship with his biological father was frayed, and he lost his best friend to gun violence. Without his Black fathers, each one contributing something profound to his character and enlarging his sense of life’s possibilities, he surely would not have become the man he is today―civil rights and education policy attorney, county councilman, husband, father.

Inspired by Jawando’s involvement in My Brother’s Keeper, President Obama’s successful mentorship program for young men of color, My Seven Black Fathers explores the bonds that developed between Jawando and the host of father figures who formed him: Mr. Williams, the math teacher who saw that he was bullied and taught him to tie his first tie; Joseph, the stepfather who altered his understanding of family; Jay Fletcher, the openly gay colleague of his mother who persuaded him to stop filling the emptiness inside with fast food and introduced him to the theater; Mr. Holmes, the high school chorus director and former athlete who taught him to use his voice and saw him through a crushing disappointment; and Deen Sanwoola, who helped him bridge the gap between his American upbringing and his Nigerian heritage―eventually leading to a reconciliation with his biological father. Jawando also explores the impact of Barack Obama as a role model, describing how he and the president bonded over their similar backgrounds and shared political commitments. When Obama first hired Will while working in the U.S. Senate, he introduced him as “my long lost brother.” Jawando was 27 years old when President Obama invited him to be associate director of the White House Office of Public Engagement.

Grounded in a deep appreciation of Black male experience, My Seven Black Fathers is an exciting new take on the transformative role Black men can have in each other’s lives.

"This is a story we need to hear." —Ibram X. Kendi, author of How to Be an Antiracist