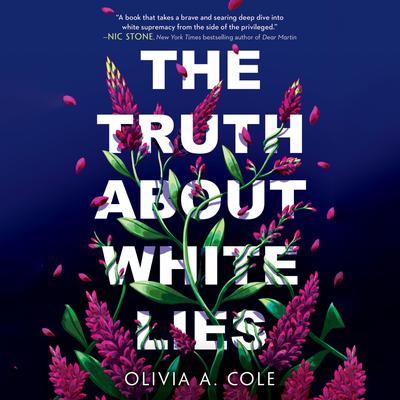 The Truth About White Lies

By Olivia A. Cole
Read by Mela Lee

For fans of I'm Not Dying with You Tonight, this gripping YA novel digs into the historical and present-day effects of white supremacy and the depths of privilege.

Shania never thinks much about being white. But after her beloved grandmother passes, she moves to the gentrifying town of Blue Rock and is thrust into Bard, the city's wealthiest private school. At Bard, race is both invisible and hypervisible, and Shania's new friends are split on what they see. There's Catherine, the school's queen bee, who unexpectedly takes Shania under her wing. Then there's Prescott, the golden boy who seems perfect...except for the disturbing rumors about an altercation he had with a Black student who left the school.

But Prescott isn't the only one with secrets. As Shania grieves for the grandmother she idolized, she realizes her family roots stretch far back into Blue Rock's history. When the truth comes to light, Shania will have to make a choice and face the violence of her silence.

Olivia A. Cole is a writer from Louisville, Kentucky. Her essays, which often focus on race and womanhood, have been published in Bitch Media, Real Simple, the Los Angeles Times, HuffPost, Teen Vogue, Gay Mag, and more. She teaches creative writing at the Kentucky Governor’s School for the Arts, where she guides her students through poetry and fiction, but also considerations of the world and who they are within it. She is the author of several books for children and adults. Learn more about Olivia and her work at oliviaacole.com and follow her on Twitter @RantingOwl.