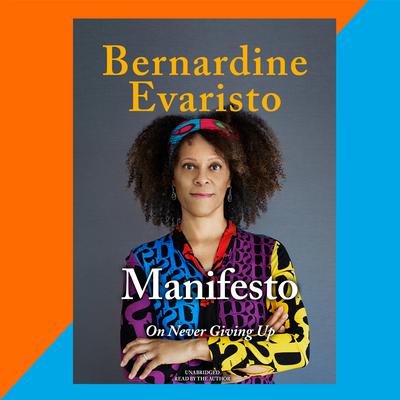 Manifesto: On Never Giving Up

A Time Magazine Pick of Most Anticipated Books of 2022

A Literary Hub Pick of Most Anticipated Upcoming Books

A Kirkus Reviews Pick of Most Anticipated Books of 2022

From the bestselling and Booker Prize–winning author of Girl, Woman, Other, Bernardine Evaristo’s memoir of her own life and writing, and her manifesto on unstoppability, creativity, and activism

Bernardine Evaristo’s 2019 Booker Prize win was a historic and revolutionary occasion, with Evaristo being the first Black woman and first Black British person ever to win the prize in its fifty-year history. Girl, Woman, Other was named a favorite book of the year by President Obama and Roxane Gay, was translated into thirty-five languages, and has now reached more than a million readers.

Evaristo’s astonishing nonfiction debut, Manifesto, is a vibrant and inspirational account of Evaristo’s life and career as she rebelled against the mainstream and fought over several decades to bring her creative work into the world. With her characteristic humor, Evaristo describes her childhood as one of eight siblings, with a Nigerian father and white Catholic mother; tells the story of how she helped set up Britain’s first Black women’s theater company; remembers the queer relationships of her twenties; and recounts her determination to write books that were absent in the literary world around her. She provides a hugely powerful perspective to contemporary conversations around race, class, feminism, sexuality, and aging. She reminds us of how far we have come, and how far we still have to go. In Manifesto, Evaristo charts her theory of unstoppability, showing creative people how they too can visualize and find success in their work, ignoring the naysayers.

Both unconventional memoir and inspirational text, Manifesto is a unique reminder to us all to persist in doing work we believe in, even when we might feel overlooked or discounted. Evaristo shows us how we too can follow in her footsteps, from first vision, to insistent perseverance, to eventual triumph.

“Shimmers with unfailing self-belief and a strong vein of humility.” —The Spectator (London)
“A rallying cry…Manifesto combines the personal with the practical to powerful effect…Entertaining as well as instructive.” —The Guardian (London)
“A triumphant meditation on her life as a writer, a Black woman, and an activist….[with] insights into the intersections of race, gender, and identity in our world.” —Time magazine
“[Evaristo] is unfailingly generous in delineating how she became herself.” —Evening Standard (London)
“A beautiful ode to determination and daring and an intimate look at one of our finest writers.” —Kirkus Reviews (starred review)
“Readers will find much to ruminate over in this meditation on the power of art and persistence.” —Publishers Weekly

Bernardine Evaristo is the Anglo-Nigerian award-winning author of several books of fiction and verse fiction, including the novel Girl, Woman, Other, which won the 2019 Booker Prize. She is the first Black woman to ever have received the Booker Prize. She is professor of creative writing at Brunel University London and vice chair of the Royal Society of Literature. Her writing is characterized by experimentation, daring, and subversion, challenging the myths of various Afro-diasporic histories and identities, and her books range in genre from poetry to short story to drama to criticism. Her books have been chosen as a book of the year thirteen times by British media, and her novel The Emperor’s Babe was a London Times Book of the Decade.