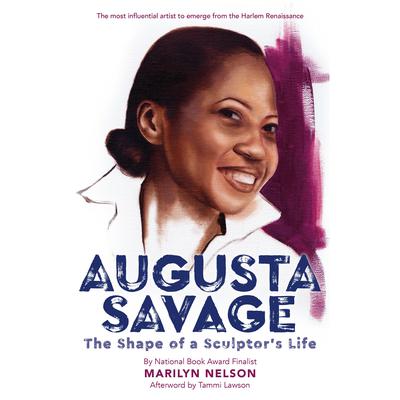 Augusta Savage: The Shape of a Sculptor's Life

A powerful biography in poems​ about a trailblazing artist and a pillar of the Harlem Renaissance—with an afterword by the curator of the Schomburg Center for Research in Black Culture.

Augusta Savage was arguably the most influential American artist of the 1930s. A gifted sculptor, Savage was commissioned to create a portrait bust of W.E.B. Du Bois for the New York Public Library. She flourished during the Harlem Renaissance, and became a teacher to an entire generation of African American artists, including Jacob Lawrence, and would go on to be nationally recognized as one of the featured artists at the 1939 World’s Fair. She was the first-ever recorded Black gallerist. After being denied an artists’ fellowship abroad on the basis of race, Augusta Savage worked to advance equal rights in the arts. And yet popular history has forgotten her name. Deftly written and brimming with photographs of Savage’s stunning sculpture, this is an important portrait of an exceptional artist. For fans of One Last Word: Wisdom from the Harlem Renaissance.

“A stunning portrait of artistic genius and Black history in America.” —Booklist (starred review)
“Acclaimed poet Marilyn Nelson narrates her own words in this biography…With slow, elongated diction and a flat cadence, Nelson conveys the dreamy wonder of the artist’s inner world…The triumph of Savage’s accomplishments is unmistakable in Nelson’s voice. The afterword, narrated in a smooth journalistic tone by Grace Angela Henry, provides useful context for the poems.” —AudioFile

Marilyn Nelson is a three-time National Book Award finalist, has won a Newbery Honor, a Printz Honor, and several Coretta Scott King Honors, and has received several prestigious poetry awards, including the Poets’ Prize and the Robert Frost Medal “for distinguished lifetime service to American poetry.” Her most recent book, How I Discovered Poetry, was named a Coretta Scott King Author Honor Book and an ALA Notable Children’s Book.