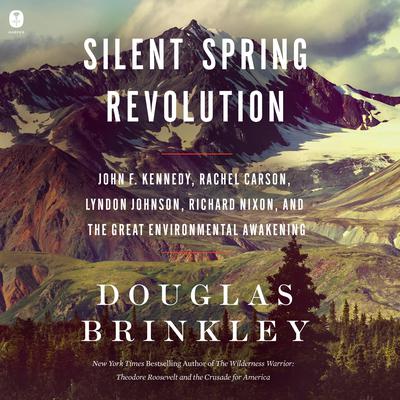 New York Times bestselling author and acclaimed presidential historian Douglas Brinkley chronicles the rise of environmental activism during the Long Sixties (1960-1973), telling the story of an indomitable generation that saved the natural world under the leadership of John F. Kennedy, Lyndon Johnson, and Richard Nixon.

With the detonation of the Trinity explosion in the New Mexico desert in 1945, the United States took control of Earth’s destiny for the first time. After the Truman administration dropped atomic bombs on Japan to end World War II, a grim new epoch had arrived. During the early Cold War years, the federal government routinely detonated nuclear devices in the Nevada desert and the Marshall Islands. Not only was nuclear fallout a public health menace, but entire ecosystems were contaminated with radioactive materials. During the 1950s, an unprecedented postwar economic boom took hold, with America becoming the world’s leading hyperindustrial and military giant. But with this historic prosperity came a heavy cost: oceans began to die, wilderness vanished, the insecticide DDT poisoned ecosystems, wildlife perished, and chronic smog blighted major cities.

In Silent Spring Revolution, Douglas Brinkley pays tribute to those who combated the mauling of the natural world in the Long Sixties: Rachel Carson (a marine biologist and author), David Brower (director of the Sierra Club), Barry Commoner (an environmental justice advocate), Coretta Scott King (an antinuclear activist), Stewart Udall (the secretary of the interior), William O. Douglas (Supreme Court justice), Cesar Chavez (a labor organizer), and other crusaders are profiled with verve and insight.

Carson’s book Silent Spring, published in 1962, depicted how detrimental DDT was to living creatures. The exposé launched an ecological revolution that inspired such landmark legislation as the Wilderness Act (1964), the Clean Air Acts (1963 and 1970), and the Endangered Species Acts (1966, 1969, and 1973). In intimate detail, Brinkley extrapolates on such epic events as the Donora (Pennsylvania) smog incident, JFK’s Limited Nuclear Test Ban Treaty, Great Lakes preservation, the Santa Barbara oil spill, and the first Earth Day.

With the United States grappling with climate change and resource exhaustion, Douglas Brinkley’s meticulously researched and deftly written Silent Spring Revolution reminds us that a new generation of twenty-first-century environmentalists can save the planet from ruin.

Douglas Brinkley is a historian and author of many books, including six New York Times bestsellers. He is the Katherine Tsanoff Brown Chair in Humanities and Professor of History at Rice University, a CNN presidential historian, and a contributing editor at Vanity Fair. In the world of public history, he serves on boards, at museums, at colleges, and for historical societies. The Chicago Tribune dubbed him “America’s New Past Master.” The New York Historical Society has chosen him as its official US presidential historian. His book Cronkite won the Sperber Prize, while The Great Deluge: Hurricane Katrina, New Orleans, and the Mississippi Gulf Coast received the Robert F. Kennedy Book Award. He received a Grammy Award for Presidential Suite. His two-volume, annotated Nixon Tapes won the Arthur S. Link–Warren F. Kuehl Prize. He is the recipient of seven honorary doctorates in American studies and is a member of the Century Association, the Council on Foreign Relations, and the James Madison Council of the Library of Congress.