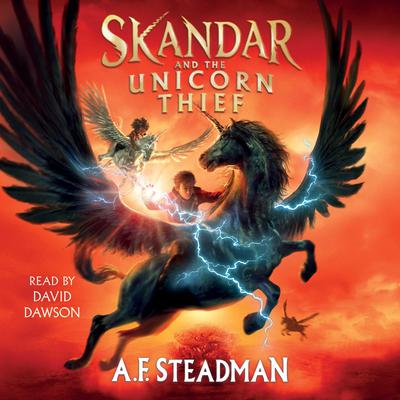 Skandar and the Unicorn Thief

A young boy who dreams of riding a deadly unicorn of his own fights for his destiny in this fantastical middle grade debut perfect for fans of the Percy Jackson and Eragon series!

Unicorns don’t belong in fairy tales—they belong in nightmares. The deadly beasts can only be tamed by the rider who hatches them.

Skandar Smith has only ever wanted to be a unicorn rider, and the time has finally come for him to take his Hatchery Exam, which will determine whether he is destined to hatch a unicorn egg. But when Skandar is stopped from taking the exam, and the mysterious and frightening Weaver steals the most powerful unicorn in the world, becoming a rider proves a lot more dangerous than he could ever have imagined.

As he faces elemental magic, fierce sky battles, ancient secrets, nail-biting races and, of course, bloodthirsty unicorns, Skandar realizes he and his friends are in graver danger than he ever imagined.

A.F. Steadman was awarded a distinction in a creative writing master’s from the University of Cambridge. Before focusing on writing, Annabel worked in both corporate and family law until she realized that there wasn’t nearly enough magic involved.