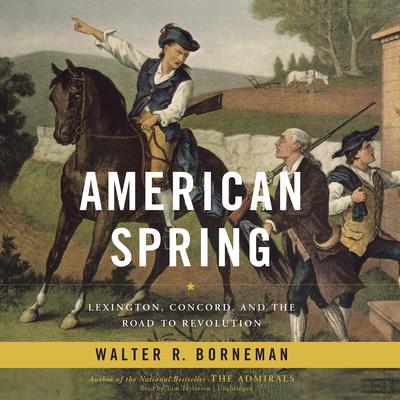 American Spring: Lexington, Concord, and the Road to Revolution

When we look back on our nation's history, the American Revolution can feel almost like a foregone conclusion. In reality, the first weeks of the war were much more tenuous, and a fractured and ragtag group of colonial militias had to coalesce to have even the slimmest chance of toppling the mighty British Army.

American Spring follows a fledgling nation from Paul Revere's little-known ride of December 1774 and the first shots fired on Lexington Green through the catastrophic Battle of Bunker Hill, culminating with a Virginian named George Washington taking command of colonial forces on July 3, 1775.

Focusing on the colorful heroes John Hancock, Samuel Adams, Mercy Otis Warren, Benjamin Franklin, and Patrick Henry, and the ordinary Americans caught up in the revolution, Walter Borneman tells the story of how a decade of discontent erupted into an armed rebellion that forged our nation.

“Walter Borneman has written an engaging and illuminating account of some of the most critical weeks in American history. Here is how it all began.” —Jon Meacham, New York Times bestselling author of Thomas Jefferson: The Art of Power
“Likely to be one of the enduring accounts of the opening of the American Revolution…Loaded with intriguing details, sort of historical nonpareil candies sprinkled throughout the account…A pleasing marriage of scholarly research…and approachable language.” —Boston Globe
“An extremely detailed, opinionated account of events in 1775 Massachusetts ending (despite the title) two months after the famous skirmishes in the June Battle of Bunker Hill…Taking advantage of massive documentation, Borneman delivers a gripping, almost moment-by-moment account of the nasty exchanges and bloody retreat of British troops followed by hundreds and then thousands of militia who camped around Boston and laid siege…First rate.” —Kirkus Reviews (starred review)
“Borneman takes on the oft-examined topic of the Revolutionary War and zooms in on the events and months leading up to the rebellion—the ‘American’ spring, as it were, of 1775, up until Monday, July 3, 1775, when George Washington officially takes command of the Continental Army…His extensive coverage of the events and balanced writing style make it an enjoyable and accessible read.” —Publishers Weekly
“Popular military historian Borneman presents the outbreak of the American War of Independence in 1775…Borneman’s saga proves to be capably constructed and accessible to an audience looking for an introduction to these epic events in American history.” —Booklist

Walter R. Borneman is the author of several works of nonfiction, including 1812, The French and Indian War, Polk, and the New York Times bestselling The Admirals. He holds both a master’s degree in history and a law degree. He lives in Colorado.