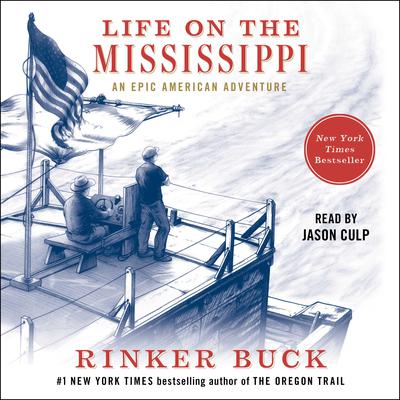 Life on the Mississippi: An Epic American Adventure

The eagerly awaited return of master American storyteller Rinker Buck, whose last book The Oregon Trail was a triumphant New York Times bestseller, Life on the Mississippi is another epic, enchanting blend of history and adventure in which Buck builds an authentic wooden flatboat from the early 1800s and pilots it down the Mississippi River, illuminating the forgotten past of the river and its grand “flatboat era” that dramatically expanded the country in the decades before Western expansion.

In 2015, listeners, critics, and booksellers across the country fell in love with a singular American voice: Rinker Buck, whose infectious curiosity about history launched him across the West in a covered wagon and propelled his book, The Oregon Trail, to ten weeks on the New York Times hardcover bestseller list. The Oregon Trail was hailed as a “real nonfiction thriller” (The New York Review of Books), a “quintessential American story” (The Christian Science Monitor) that “so ensnares the emotions it becomes a tear-jerker at its close” (Star Tribune, Minneapolis) and “will leave you daydreaming and hungry to see this land” (The Boston Globe). The New York Times’s Dwight Garner said that Buck’s voice “is alert and unpretentious in a manner that put me in mind of Bill Bryson’s comic tone in A Walk in the Woods.”

Now, in his highly anticipated new book, Life on the Mississippi, Buck chronicles his latest grand adventure: building an authentic wooden flatboat from the bygone flatboat era of the early 1800s and journeying down the Mississippi River to New Orleans.

A modern-day Huck Finn, Buck casts off down the river accompanied by an eccentric crew of daring shipmates. Over the course of his voyage, Buck steers his fragile wooden craft through narrow channels dominated by massive cargo barges, rescues his first mate gone overboard, sails blindly through fog, clashes with overzealous period reenactors, and much more. In addition, he charts his own geographical and emotional journey while also delivering a richly satisfying work of history that brings to life a lost era. The role of the flatboat in our country’s evolution is far more significant than most Americans realize. Decades before we struck out for the Western territories, we migrated Southwest en masse. Between 1800 and 1840, millions of farmers, merchants, and hopeful pioneers embarked from states like Pennsylvania and Virginia on wooden flatboats headed beyond the Appalachians to places like Kentucky, Mississippi, and Louisiana. The mighty river currents carried waves of settlers and tons of cargo from farms to ports, populating new territories and revolutionizing the American landscape. As Buck points out, the inland rivers of the Ohio and Mississippi Valleys were in fact America’s first western frontier.

With a rare and captivating narrative power that blends armchair adventure with absorbing untold history, Life on the Mississippi is a muscular and majestic feat of storytelling from a writer who may be the closest to Twain that we have today.

“Besides being a willing and intrepid traveler, Buck is also an able interpreter of history…For armchair-travel aficionados and frontier-history buffs, it doesn’t get much better.” —Kirkus Reviews (starred review)

Rinker Buck is a New York Times bestselling author whose work has won the PEN New England Award, the Eugene S. Pulliam National Journalism Writing Award, and the Society of Professional Journalists Sigma Delta Chi Award. He began his career in journalism at the Berkshire Eagle and was a longtime staff writer for the Hartford Courant. He has written for Vanity Fair, New York, Life, and many other publications.