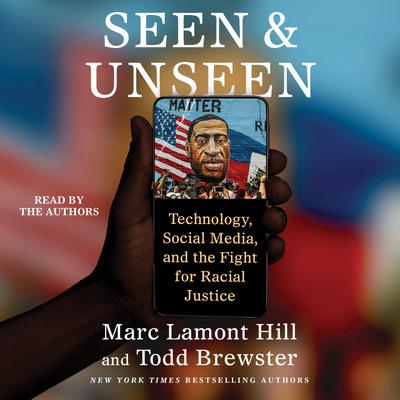 Seen and Unseen: Technology, Social Media, and the Fight for Racial Justice

A riveting exploration of how the power of visual media over the last few years has shifted the narrative on race and reignited the push towards justice by the author of the “worthy and necessary” (The New York Times) Nobody Marc Lamont Hill and the bestselling author and acclaimed journalist Todd Brewster.

With his signature “clear and courageous” (Cornel West) voice Marc Lamont Hill and New York Times bestselling author Todd Brewster weave some of the most pivotal recent moments in the country’s racial divide—the killings of George Floyd and Ahmaud Arbery and the harassment of Christian Cooper—into their historical context. In doing so, they reveal the common thread between these harrowing incidents: video recordings and the immediacy of technology has irrevocably changed our conversations about race and in many instances tipped the levers of power in favor of the historically disadvantaged.

Drawing on the powerful role of technology as a driver of history, identity, and racial consciousness, Seen and Unseen asks why, after so much video confirmation of police violence on people of color, it took the footage of George Floyd to trigger an overwhelming response of sympathy and outrage?

In the vein of The New Jim Crow and Caste, Seen and Unseen incisively explores what connects our moment to the history of race in America but also what makes today different from the civil rights movements of the past and what it will ultimately take to push social justice forward.

Todd Brewster is an American author, journalist, and film producer. He has served as Don E. Ackerman director of oral history at the United States Military Academy, West Point, and is a longtime journalist who has worked as an editor for Time, Life, and as senior producer for ABC News. He has written for Vanity Fair, Time, Life, the Huffington Post, the Philadelphia Inquirer, the New York Times, and is coauthor, with the late Peter Jennings, of the bestselling books The Century, The Century for Young People, and In Search of America. He lives with his wife and two sons in Ridgefield, Connecticut.

Marc Lamont Hill is an author, journalist, and host of BET News. He is one of the leading intellectual voices in the country. He is the host of BET News. An award-winning journalist, he has received numerous prestigious awards from the National Association of Black Journalists, GLAAD, and the International Academy of Digital Arts and Sciences.He is the Steve Charles Professor of Media, Cities, and Solutions at Temple University. Prior to that, he held positions at Columbia University and Morehouse College. He is the author of Nobody: Casualties of America’s War on the Vulnerable, from Ferguson to Flint and Beyond. He is the owner of Uncle Bobbie’s Bookstore in Philadelphia.