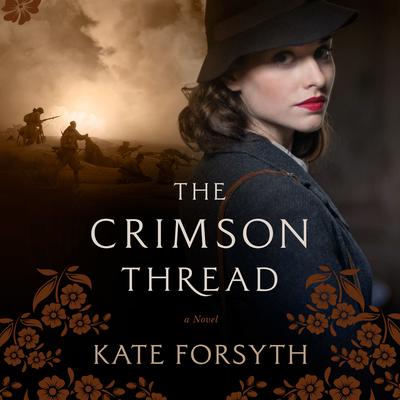 A Washington Post Pick of Historical Fiction about Resilience amid War

An Audible Editors Top Pick of the Month

In Crete during World War II, Alenka, a young woman who fights with the resistance against the brutal Nazi occupation, finds herself caught between her traitor of a brother and the man she loves, an undercover agent working for the Allies.

May 1941. German paratroopers launch a blitzkrieg from the air against Crete. They are met with fierce defiance, the Greeks fighting back with daggers, pitchforks, and kitchen knives. During the bloody eleven-day battle, Alenka, a young Greek woman, saves the lives of two Australian soldiers.

Jack and Teddy are childhood friends who joined up together to see the world. Both men fall in love with Alenka. They are forced to retreat with the tattered remains of the Allied forces over the towering White Mountains. Both are among the seven thousand Allied soldiers left behind in the desperate evacuation from Crete’s storm-lashed southern coast. Alenka hides Jack and Teddy at great risk to herself. Her brother Axel is a Nazi sympathizer and collaborator and spies on her movements.

As Crete suffers under the Nazi jackboot, Alenka is drawn into an intense triangle of conflicting emotions with Jack and Teddy. Their friendship suffers under the strain of months of hiding and their rivalry for her love. Together, they join the resistance and fight to free the island, but all three will find themselves tested to their limits. Alenka must choose whom to trust and whom to love and, in the end, whom to save.

“Kate Forsyth’s masterful gift for recasting classic fairy tales in fiction is unmatched! In The Crimson Thread she sets the legend of Ariadne and the minotaur in WWII Greece, where a resourceful Cretan beauty is caught dangerously between a brash Australian soldier, his shy poet best friend, and her own Hitler-obsessed younger brother as her village comes under fire in the brutal German invasion of Crete. Love, jealousy, war, espionage, and myth combine in a tale as complex and beguiling as Ariadne’s labyrinth—I couldn’t put it down!”  —Kate Quinn, New York Times bestselling author of The Diamond Eye
“No one spins a tale quite like Kate Forsyth with her musical prose and vivid details that twine together into story threads as timeless as a Greek epic. Family, honor, war, love. It’s all there in her latest novel, The Crimson Thread, set on the wild and beautiful island of Crete—and the horror of the Nazi invasion. The Crimson Thread is a compelling and engaging must-read for fans of WWII fiction!” —Heather Webb, USA Today bestselling author of The Next Ship Home
“A spellbinding tale of resistance and love in WWII Crete. Courage, sacrifice, and betrayal form the backdrop for a Homeric love triangle, where a young woman faces impossible choices in a time of struggle and survival. Forsyth never fails to enchant with her masterful loom, weaving myth and history into her unique tapestries.” —C. W. Gortner, author of Mademoiselle Chanel
“The Crimson Thread is a lyrical, majestic work of fiction. Kate Forsyth writes beautifully about the mythic and the romantic, about the minotaur hidden in a maze, about ruins of the palace of Knossos on Crete and the brutal, heartbreaking moments that entrap all. I didn’t want the book to end!” —Weina Dai Randel, award-winning author of The Last Rose of Shanghai
“I was surprised and delighted…I heartily enjoyed this book and would highly recommend it.” —San Francisco Book Review (5 stars)
“Kate Forsyth’s new novel, The Crimson Thread, weaves myth and history in a dazzling tapestry of love, courage, and war. Set on Crete during WWII with the Palace of Knossos at its heart, Forsyth conjures a labyrinthine tale to rival Ariadne’s. Alenka, a young woman in the Cretan resistance, bravely faces not only the occupying forces but a monstrous half brother and two rival lovers. The tale deftly ties real history and cameos from people like Patrick Leigh Fermor seamlessly into the lives of the fictional characters. Lose yourself in this war story where love is the light which guides you home.” —Kate Lord Brown, author of The Perfume Garden
“A riveting tale of courage, love, and betrayal in Crete during WWII…Bookstores are awash in novels depicting the depredations of Nazi occupation in various European countries, but Greece’s travails rarely appear in fiction—the Cretan experience, hardly ever. This makes the wide-ranging and suspenseful The Crimson Thread all the more interesting and oddly timely. The way it highlights the courage and determination of Cretans in fighting the enemy brings to mind the stalwart resolve of Ukrainians bravely doing the same today.” —Washington Independent Review of Books
“A welcome addition to the WWII genre…This story has all the elements of a spy novel, a frontline war novel, and a wartime romance, all wrapped up in the mythology of the Minotaur, Theseus, and, of course, Ariadne…There are many wonderful WWII novels out there, and I would put The Crimson Thread among them. Highly recommended.” —Historical Novels Review

Kate Forsyth wrote her first novel at the age of seven and has since sold more than a million copies around the world. Her books include Bitter Greens, a retelling of Rapunzel which won the 2015 American Library Association Award for Best Historical Fiction; The Wild Girl, the story of the forbidden romance behind the Grimm Brothers’s famous fairy tales, which was named the Most Memorable Love Story of 2013; and The Beast’s Garden, a retelling of “The Singing, Springing Lark” set in the underground resistance to Hitler in Nazi Germany. Recently voted one of Australia’s Favorite 15 Novelists, Kate Forsyth has been called “one of the finest writers of this generation.” She has a BA in literature, an MA in creative writing, and a doctorate in fairy-tale studies, and is also an accredited master storyteller with the Australian Guild of Storytellers.