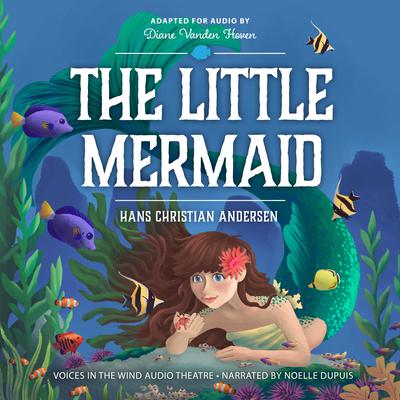 Far out at sea, where the water is the bluest of blue, lived a Little Mermaid with her five sisters in an enchanting underwater city surrounded by beautiful flowers and exotic fish of all kinds. Fascinated by stories of the world beyond where the animals and humans dwell, they eagerly awaited their turn to the surface. So, as decree allowed, the Little Mermaid was permitted to rise out of the sea to sit on the rocks in the moonlight on her sixteenth birthday. In this strange new world, she saves a charming prince from certain death and falls in love. But to be with him, the Little Mermaid must make a pact with the Sea Witch, with tragic consequences.

Hans Christian Andersen (1805–1875) was born in Odense, Denmark, the son of a poor shoemaker and a washerwoman. As a young teenager, he became quite well known in Odense as a reciter of drama and as a singer. When he was fourteen, he set off for the capital, Copenhagen, determined to become a national success on the stage. He failed miserably, but made some influential friends in the capital who got him into school to remedy his lack of proper education. In 1829 his first book was published. After that, books came out at regular intervals. His stories began to be translated into English as early as 1846. Since then, numerous editions, and more recently Hollywood songs and Disney cartoons, have helped to ensure the continuing popularity of the stories in the English-speaking world.