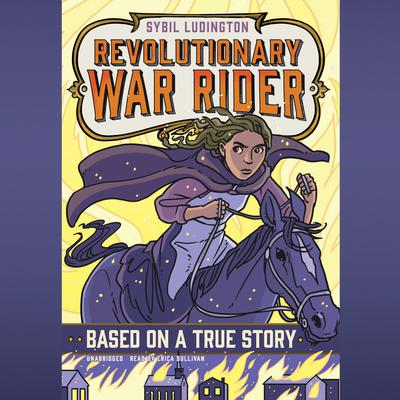 The Based on a True Story Series

A historical fiction middle-grade novel in the Based on a True Story series about the Revolutionary War experiences of Sybil Ludington, who gathered troops to fight the British

What would you do if your country was counting on you to deliver an important message? That’s the story of sixteen-year-old Sybil Ludington’s famous midnight ride.

In 1777, Sybil and her family believe the American colonies should be free from British control, and Sybil’s father leads a regiment of New York militiamen. Using spy tactics and codes, the Ludingtons gather intelligence, hoping to stay one step ahead of their enemies. When British troops raid nearby Danbury, Connecticut, Sybil gallops through the night to call out her father’s men. With obstacles at every turn, will she make it in time to stop the British?

Based on a True Story books are exciting historical fiction about real children who lived through extraordinary times in American History.

“Readers will admire Sybil for her fortitude and appreciate the insight they gain into her time.” —Booklist

E. F. Abbott is a pseudonym for Kristin O’Donnell Tubb, author of Selling Hope and The 13th Sign. She and her family live in Tennessee.