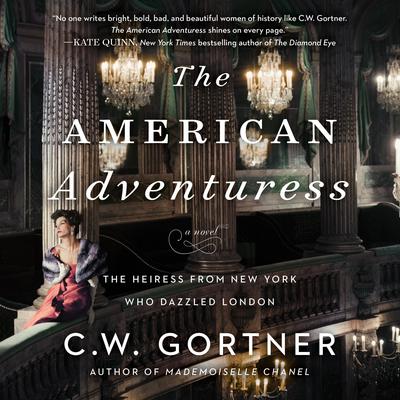 The American Adventuress: A Novel

"No one writes bright, bold, bad, and beautiful women of history like C.W. Gortner, and he outdoes himself with his latest heroine: Jennie Jerome, American heiress, royal mistress, and mother of Winston Churchill. The American Adventuress shines on every page with Jennie's irrepressible thirst for adventure, love, and everything else life has to offer!" -- Kate Quinn, New York Times bestselling author of The Rose Code

The story of Jennie Jerome Churchill, mother of Winston, a New York born heiress who always lived life on her own terms.

Daughter of New York financier Leonard Jerome, Jennie was born into wealth—and scandal. Upon her parents’ separation, her mother took Jennie and her sisters to Paris, where Mrs. Jerome was determined to marry her daughters into the most elite families. The glamorous city became their tumultuous finishing school until it fell to revolt.

Fleeing to Queen Victoria’s England, Jennie soon caught the eye of aristocrat Randolph Spencer-Churchill, son of the Duke of Marlborough, one of Britain’s loftiest peers. It was love at first sight, their unconventional marriage driven by mutual ambition and the birth of two sons. Undeterred by premature widowhood or society’s rigid expectations, Jennie brashly carried on a lifelong intimate friendship with Edward, Prince of Wales—a notorious bon vivant—and had two later marriages to younger men. When her son Winston launched his brilliant political career, Jennie guided him to success, his most vocal and valuable supporter.

By turns scandalous, tragic, and exciting, Jennie Jerome lived an unconventional life full of defiance—one that enshrined her as an American adventuress.