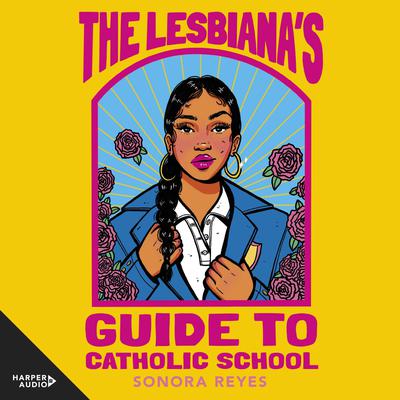 The Lesbiana's Guide to Catholic School

Sonora Reyes' debut YA novel is a knockout-a sharply funny and incredibly moving portrait of a queer Mexican American girl learning to celebrate who she is at her very core.

Seventeen-year-old Yamilet Flores prefers drawing attention for her killer eyeliner, not for being one of the only Mexican kids at her new, mostly white, very rich, Catholic school. But at least here no one knows she's gay, and Yami intends to keep it that way.

After being outed by her crush and ex-best friend before transferring to Slayton Catholic, Yami has new priorities: keep her brother out of trouble, make her mom proud, and most importantly, don't fall in love. Granted, she's never been great at any of those things, but that's a problem for Future Yami.

The thing is, it's hard to fake being straight when Bo, the only openly queer girl at school, is so annoyingly perfect. And smart. And talented. And confident. And cute. So cute. But Yami isn't sure if she likes Bo or if she's just jealous of her unapologetic nature. Either way, she isn't ready to make the same mistake again. If word got to her mom, she could face a lot worse than rejection. WWJD? No. WWSGD: What would a straight girl do?

By turns hilarious, poignant, and searingly honest, The Lesbiana's Guide to Catholic School explores the joys and heartaches of stepping into your full truth in a world that, too often, tells queer people of color not to be too much of themselves. PRAISE

"The portrayal of found family and the threads of love and acceptance woven into this story make it a satisfying read with a hopeful ending. A textured and gratifying novel." - Kirkus Review

"With off the charts heart and humor, The Lesbiana's Guide to Catholic School is an immediate favorite. Sonora's voice is one to watch!" - Julie Murphy, #1 New York Times–bestselling author of Dumplin'

"This book is a warm, protective hug for teens who are fighting to be seen as themselves in a world that wants them to hide." - Aiden Thomas, New York Times–bestselling author of Cemetery Boys

"Full of heart, humor, and a swoon-worthy romance, The Lesbiana's Guide to Catholic School is the recovering Catholic school student's road to healing. Balancing themes of self-advocacy and self-discovery with comedy and romance tropes, this is a must-read for queer teens growing into their own." - Emery Lee, author of Meet Cute Diary