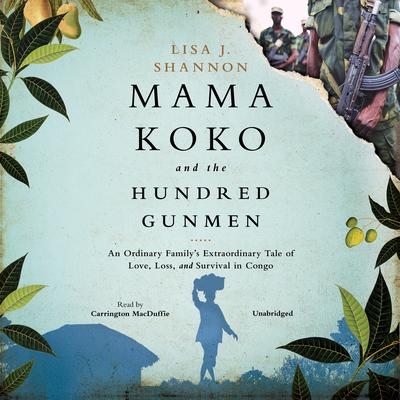 Mama Koko and the Hundred Gunmen: An Ordinary Family’s Extraordinary Tale of Love, Loss, and Survival in Congo

International human rights activist Lisa Shannon spent many afternoons at the kitchen table having tea with her friend Francisca Thelin, who often spoke of her childhood in Congo. Thelin would conjure vivid images of lush flower gardens, fish the size of small children, and of children running barefoot through her family's coffee plantation, gorging themselves on fruit from the robust and plentiful mango trees. She urged Shannon to visit her family in Dungu to get a taste of real Congo, peaceful Congo, a place so different from the conflict-ravaged lands Shannon knew from her work as an activist.

But then the nightly phone calls from Congo began: hasty, static-filled reports from Francisca's mother of gunmen from Joseph Kony's Lord's Resistance Army, which had infested Dungu and began launching attacks. Night after night for a year, "Mama Koko" delivered the devastating news of Francisca's cousins, nieces, nephews, friends, and neighbors, who had been killed, abducted, burned alive on Christmas Day.

In an unlikely journey, Shannon and Thelin decided to travel from Portland, Oregon, to Dungu to witness firsthand the devastation unfolding at Kony's hands. Masquerading as Francisca's American sister-in-law, Shannon tucked herself into Mama Koko's raw cement living room and listened to the stories of Mama Koko and her husband, Papa Alexander, as well as those from dozens of other friends and neighbors—"Mama Koko's War Tribunal"—who lined up outside the house and waited for hours, eager to offer their testimony.

In Mama Koko and the Hundred Gunmen, Shannon weaves together the family's tragic stories of LRA encounters with tales from the family's history: Mama Koko's early life as a gap-toothed beauty plotting to escape her inevitable fate of wife and motherhood; Papa Alexander's empire of wives he married because they cooked and cleaned and made good coffee; and Francisca's childhood at the family "castle" and coffee plantation. These lively stories transport Shannon from the chaos of the violence around her and bring to life Francisca's kitchen-table stories of the peaceful Congo.

But as the LRA camp out on the edge of town grew, tensions inside the house reached a fever pitch, and Shannon and Thelin's friendship was fiercely tested. Shannon was forced to confront her limitations as an activist and reconcile her vision of what it means to effect meaningful change in the lives of others.

Mama Koko and the Hundred Gunmen is at once an illuminating piece of storytelling and an exploration of what it means to truly make a difference. It is an exquisite testimony to the beauty of human connection and the strength of the human spirit in times of unimaginable tragedy.

“Lisa Shannon is known for the courage, grace, and love through which she brings to everyone’s attention the harshness and beauty of humanity experienced in the Democratic Republic of Congo. With a compassionate eye, she analyzes how ordinary individuals deal with that difficult reality. In Mama Koko and the Hundred Gunmen, Shannon shows the magic of her writing by taking the reader on that journey. It is a journey of the heart that everyone should read.” —Zainab Salbi, founder of Women for Women International and author of Between Two Worlds
“Shannon’s goal was to obtain first-person reports she could bring back to the US of the brutality suffered in the region from Joseph Kony’s Lord’s Resistance Army…Shannon’s struggle was to make her work more than a ‘show,’ and she succeeds brilliantly. This compelling narrative is not easily forgotten, nor are the many people whose stories she collected. This is a valiant record of the testimonies of vital witnesses; readers will not be able to look away.” —Booklist
“Shannon, an international human rights activist and founder of the nonprofit Run for Congo Women, tells the harrowing story of a Congolese family torn apart by the ongoing threat of Joseph Kony and his Lord’s Resistance Army…A highly personal and memorable story.” —Kirkus Reviews
“In Mama Koko, Lisa Shannon has managed a rare feat of empathy: a character who is so strong and centered and whose journey through difficulty is not sentimental but a real and complicated transformation. This is a small miracle of life and love that we can all believe in. This is a lovely book and a deeply human one.” —Chris Abani, author of Graceland
“Lisa Shannon drills down past the tawdry stereotypes to give the reader privileged insight into part of the Congolese conflict, dealing in equal measure with the humanity and the horror.” —Jason Stearns, author of Dancing in the Glory of Monsters

Lisa J. Shannon is a human rights activist, writer, and speaker. In 2005 she founded Run for Congo Women, the first national grassroots campaign in the United States working to raise awareness of the forgotten humanitarian crisis in Congo. Since then, she has spearheaded multiple major media and human rights campaigns for Congo and Somalia. She was a 2012–2013 Gleitsman fellow with Harvard’s Center for Public Leadership and is a 2013–2014 fellow with Harvard Kennedy School’s Carr Center for Human Rights Policy. Shannon holds a master’s in public administration from Harvard Kennedy School and an honorary doctorate from Georgetown. She is the author of the award-winning A Thousand Sisters and has been featured countless places, including Oprah, the New York Times, the Economist, and NPR’s Morning Edition. In 2010 she was named one of the hundred most influential women on the planet by O, The Oprah Magazine. She lives in Portland, Oregon.