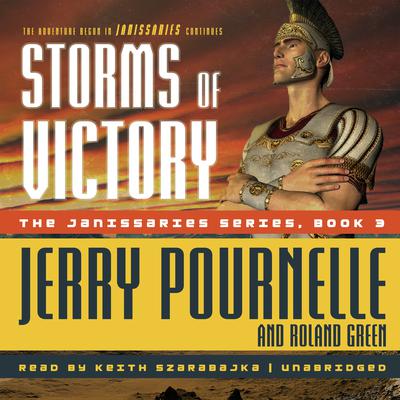 By Jerry Pournelle and Roland Green
Read by Keith Szarabajka

The adventure begun in Janissaries continues.

Kidnapped from Earth as they were about to die in battle, Rick Galloway and his band of mercenaries, like the other human slaves on the planet Tran, will not be missed. Subjects of the Shalnuksi slave masters, they are forced to harvest the priceless drug surinomaz. Now, even as slaves, Earth's transplanted warriors are locked in battle—against each other. But an epoch is ending. As the Demon Star sweeps toward its devastating apex, the slave masters flee the planet to await its annihilation in safety. Soon all life on the planet will cease, leaving it ripe for repopulation.

Roland J. Green is the author of the Starcruiser Shenandoah and Wandor series and numerous Conan novels, as well as the coauthor, with Jerry Pournelle, of the Janissaries series.