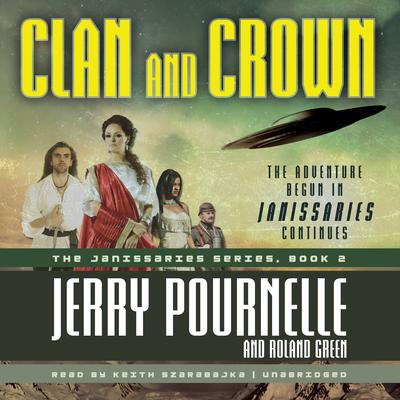 By Jerry Pournelle and Roland Green
Read by Keith Szarabajka

For the first few years, Rick Galloway and his band of mercenaries were doing well just to survive. They'd been swept off a hilltop in Africa by a flying saucer and deposited on an alien world where the other inhabitants were human—but from various and unfriendly periods of history, all collected by flying saucer raids.

Rick has faced facts: this place is going to be home, permanently. To create a safe society for themselves and the families they are gradually building, they need to do more than just survive; they must convince the others that a unified, peaceful society is better than a collection of warring tribes. Force would not be Rick's chosen method of persuasion, but on a planet where the other dominant culture is one brought straight from ancient Rome, force may be the only way.

Roland J. Green is the author of the Starcruiser Shenandoah and Wandor series and numerous Conan novels, as well as the coauthor, with Jerry Pournelle, of the Janissaries series.