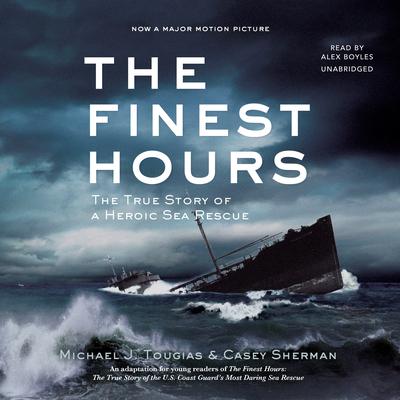 On the night of February 18, 1952, during one of the worst winter storms that New England has ever seen, two oil tankers just off the shore of Cape Cod were torn in half by the force of the storm. This middle-grade adaptation of an adult nonfiction book tells the story of the shipwreck and a harrowing Coast Guard rescue when four men in a tiny lifeboat overcame insurmountable odds and saved more than thirty stranded sailors. This is a fast-paced, uplifting story that puts young listeners in the middle of the action. It’s a gripping story of heroism and survival with the same intensity as The Perfect Storm.

“Gripping…Tougias and Sherman ably narrate the desperate struggles of crew members on both the wrecks and the rescue boats…will make readers appreciate the bravery of the men who put their lives on the line…action-packed.” —Publishers Weekly

Casey Sherman is considered one of America’s preeminent true-crime authors and investigative journalists. His books include The Ice Bucket Challenge; The Finest Hours, coauthored with Michael J. Tougias and made into a major motion picture by Walt Disney Pictures; Animal: The Bloody Rise and Fall of the Mob’s Most Feared Assassin; Search for the Strangler; and Bad Blood. He has been a finalist for the Massachusetts Book of the Year honors and the New Hampshire Literary Awards nonfiction prize. He has been a featured guest on NBC’s Today and Dateline; CBS’s The Early Show, 48 Hours, and the CBS Evening News; ABC World News Tonight, CNN, Fox News, MSNBC, Discovery, The History Channel, A&E, The Travel Channel, and The View.