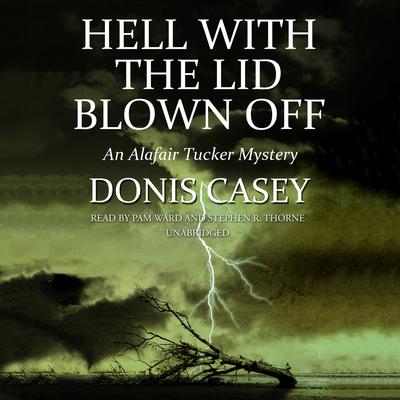 Hell with the Lid Blown Off: An Alafair Tucker Mystery

Some secrets can come back from the grave.

In the summer of 1916, a big twister brings destruction to the land around Boynton, Oklahoma. Alafair Tucker's family and neighbors are not spared the ruin and grief spread by the storm. But no one is going to mourn for Jubal Beldon, who made it his business to know the ugly secrets of everyone in town. It doesn't matter if Jubal's insinuations are true or not. In a small town like Boynton, rumor is as damaging as fact.

But as Mr. Lee, the undertaker, does his grim duty for the storm victims, he discovers that even in death Jubal isn't going to leave his neighbors in peace. He was already dead when the tornado carried his body to the middle of a fallow field. Had he died in an accident, or had he been murdered by someone whose secret he had threatened to expose? There are dozens of people who would have been happy to do the deed, including members of Jubal's own family.

As Sheriff Scott Tucker and his deputy Trenton Calder investigate the circumstances surrounding Jubal's demise, it begins to look like the prime suspect may be someone very dear to the widow Beckie MacKenzie, the beloved music teacher and mentor of Alafair's daughter Ruth. Ruth fears that the secrets exposed by the investigation are going to cause more damage to her friend's life than did the tornado. Alafair has her own suspicions about how Jubal Beldon came to die, and the reason may hit very close to home.

“A huge tornado brings unexpected trouble to the people of Boynton, Okla., in Casey’s excellent seventh Alafair Tucker mystery…As the action builds to a surprising denouement, Casey provides an engaging portrait of the close-knit society that was commonly found in the rural Midwest at the time. Alafair Tucker, her large family, and their friends are a pleasure to spend time with.” —Publishers Weekly (starred review)
“Weather dominates this seventh entry in Casey’s historical series set in Oklahoma. With their multiple points of view, these titles are ideal for readers who enjoy a skillful yarn with a bit of mystery tucked into the tale.” —Library Journal
“A powerful picture of the times.” —Booklist