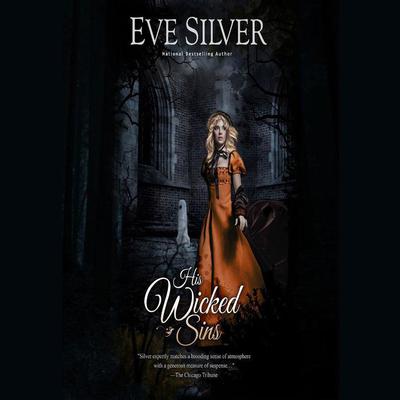 If you love historical romantic suspense with a Gothic vibe, don't miss this thrilling listen!

His Wicked Sins is a stand-alone story. The Dark Gothic series can be listened to in any order!

Determined to help her impoverished family, Elizabeth Canham accepts a position at Burndale Academy, an isolated girl's school filled with secrets and shadows. There she meets mysterious widower Griffin Fairfax, a man dogged by dark rumors, a man who both frightens and fascinates her.

But Beth has secrets of her own, nightmares that haunt her and fears that follow her into the light of day when a woman is found dead in the nearby woods - the victim of a brutal murder...a murder that bears terrifying similarity to others.

Then Beth discovers all the victims were intimately connected to Griffin. Beth's past has taught her to be wary, but her heart tells her Griffin cannot be the charming, seductive killer stalking the night, stealing women's hearts...and lives.

Eve Silver lives with her gamer husband and sons, sometimes in Canada but often in worlds she dreams up. She loves kayaking, sunshine, dogs, desserts, and books—lots and lots of books.