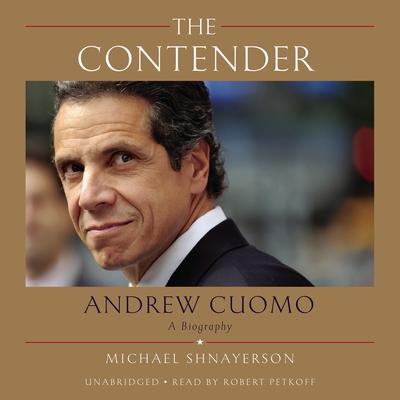 The Contender: Andrew Cuomo, a Biography

The story of Andrew Cuomo's political life reads like a novel, and for the first time that story will be told in The Contender, a no-holds-barred biography by Vanity Fair writer Michael Shnayerson. In many ways, Cuomo's rise and fall and rise again is an iconic narrative: the story of the young American politician of vaunting ambition, aiming for nothing less than the presidency. Like many other politicians, Cuomo had to come back from seeming political death and reinvent himself. He did so brilliantly, becoming New York's attorney general, compiling a four-year record of significant cases focusing on public corruption, and then running for, and winning, the governorship in 2010, promising to clean up America's most dysfunctional legislature.

In The Contender, Shnayerson digs deep into Cuomo's fascinating personal life, from his marriage to Kerry Kennedy to his relationship with Sandra Lee. Andrew Cuomo remains one of the country's most potent and impressive political leaders—one about whom pundits tend to agree that the White House is not a question of whether but of when. With Cuomo's reelection this November, the nation will be abuzz about this rising star for the 2016 presidential election.

Michael Shnayerson became a contributing editor at Vanity Fair in 1986 and is the author of eight books on a range of nonfiction subjects, including Boom: Mad Money, Mega Dealers, and the Rise of Contemporary Art.