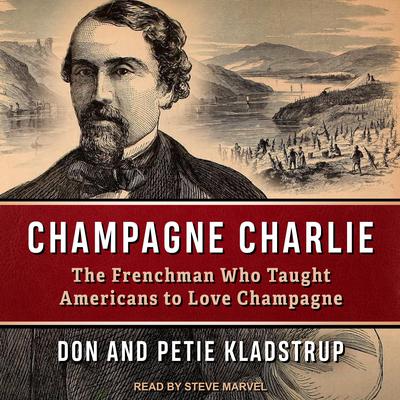 Champagne Charlie: The Frenchman Who Taught Americans to Love Champagne

By Don Kladstrup  and Petie Kladstrup
Narrated by Steve Marvel

Champagne Charlie tells the story of a dashing young Frenchman, Charles Heidsieck, who introduced hard-drinking Americans to champagne in the mid-nineteenth century and became famously known as Champagne Charlie. Ignoring critics who warned that America was a dangerous place to do business, Heidsieck plunged right in, considering it "the land of opportunity" and succeeding there beyond his wildest dreams. Those dreams, however, became a nightmare when the Civil War erupted and he was imprisoned and nearly executed after being charged with spying for the Confederacy.

Only after the Lincoln administration intervened was Heidsieck saved, but his champagne business had gone bankrupt and was virtually dead. Then, miraculously, Heidsieck became owner of nearly half the city of Denver, the fastest-growing city in the West. By selling the land, Heidsieck was eventually able to resurrect his business to its former glory.

For all its current-day glamour, effervescence, and association with the high life, champagne had a lackluster start. It was pale red in color, insipid in taste, and completely flat. Champagne's success can be traced back to King Louis XV and his mistress Madame de Pompadour, Napoleon Bonaparte, countless wars and prohibitions, and, most important to the United States, Charles Heidsieck.

Don Kladstrup is the author, together with his wife, Petie, of Champagne: How the World’s Most Glamorous Wine Triumphed Over War and Hard Times. A former television news correspondent for ABC and CBS, he has received three Emmys and numerous other awards for his work overseas. The parents of two daughters, the Kladstrups divide their time between Paris and Normandy, France.

Petie Kladstrup is a freelance writer who has written widely about France and French life. An Overseas Press Club winner, she has worked as newspaper journalist and, more recently, as a protocol officer for the United States ambassador to UNESCO. She is the author, together with her husband, Don, of Champagne: How the World’s Most Glamorous Wine Triumphed Over War and Hard Times. The parents of two daughters, the Kladstrups divide their time between Paris and Normandy, France.