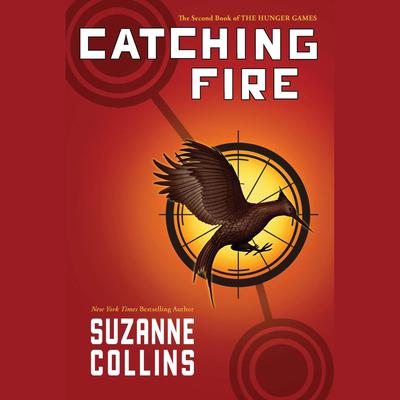 A People Magazine Best Book of 2009

Against all odds, Katniss Everdeen has won the annual Hunger Games with fellow district tribute Peeta Mellark. But it was a victory won by defiance of the Capitol and their harsh rules. Katniss and Peeta should be happy. After all, they have just won for themselves and their families a life of safety and plenty. But there are rumors of rebellion among the subjects, and Katniss and Peeta, to their horror, are the faces of that rebellion. The Capitol is angry. The Capitol wants revenge.

“Catching Fire not only lived up to my high expectations, it surpassed them. It’s just as exciting as The Hunger Games but even more gut wrenching, because you already know these characters, you’ve already suffered with them.” —Stephenie Meyer
“Collins has done that rare thing. She has written a sequel that improves upon the first book.” —New York Times
“Whereas Katniss kills with finesse, Collins writes with raw power.” —Time
“Collins expertly blends fantasy, romance, and political intrigue (so who needs vampires?).” —People
“Stellar, imaginative writing.” —Los Angeles Times
“Doesn’t disappoint when it segues into the pulse-pounding action readers have come to expect. Characters from the previous volume reappear to good effect: Katniss’ stylist, Cinna, proves he’s about more than fashion; Haymitch becomes more dimensional. But the star remains Katniss, whose bravery, honesty, and wry cynicism carry the narrative…Collins has also created an exquisitely tense romantic triangle for her heroine…By book’s end (and it’s a cliffhanger), readers will be picking sides—Peeta or Gale?” —Publishers Weekly (starred review)
“This sequel has enough action to please Hunger Games fans and leaves enough questions tantalizingly unanswered for readers to be desperate for the next installment.” —School Library Journal (starred review)
“Again, Collins’ crystalline, unadorned prose provides an open window to perfect pacing and electrifying world-building, but what’s even more remarkable is that aside from being tremendously action-packed SF thrillers, these books are also brimming with potent themes of morality, obedience, sacrifice, redemption, love, law, and, above all, survival. Honestly, this book only needs to be good enough to satisfy its legions of fans. Fortunately, it’s great. And if you were dying to find out what happens after the last book, get ready for pure torture awaiting the next.” —Booklist (starred review)
“Beyond the expert world building, the acute social commentary, and the large cast of fully realized characters, there’s action, intrigue, romance, and some amount of hope in a story readers will find completely engrossing. Collins weaves in enough background for this novel to stand alone, but it will be a far richer experience for those who have read the first installment and come to love Katniss, Peeta, Haymitch, and the rest of the desperate residents of this dystopia. A humdinger of a cliffhanger will leave readers clamoring for volume three.” —Kirkus Reviews (starred review)
“Collins ratchets up the tension in the second book in the Hunger Games trilogy. With a host of well-drawn new secondary characters and more lives on the line, this will keep readers of all ages up long past their bedtimes.” —RT Book Reviews