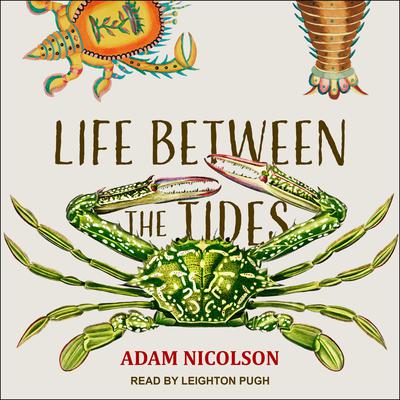 Life Between the Tides

Inside each rockpool, tucked into one of the infinite crevices of the tidal coastline, lies a rippling, silent, unknowable universe. Below the stillness of the surface course different currents of endless motion—the ebb and flow of the tide, the steady forward propulsion of the passage of time, and the tiny lifetimes of its creatures, all of which coalesce into the grand narrative of evolution.

In Life Between the Tides, Adam Nicolson investigates one of the most revelatory habitats on earth. Under his microscope, we see a prawn's head become a medieval helmet and a group of "winkles" transform a Dickensian social scene, with mollusks munching on Stilton and glancing at their pocket watches. Or, rather, is a winkle more like Achilles, an ancient hero, throwing himself toward death for the sake of glory? For Nicolson, the world of the rockpools is infinite and as intricate as our own.

As Nicolson journeys between the tides, both in the pools he builds along the coast of Scotland and through the timeline of scientific discovery, he is accompanied by great thinkers. We meet Virginia Woolf and her Waves; a young T. S. Eliot peering into his own rockpool in Massachusetts. And, of course, scientists populate the pages; not only their discoveries, but also their doubts and errors, their moments of quiet observation and their realizations.

“Evokes [the tide pools’] tiny inhabitants in lovely detail.” —New York Times Book Review
“A story that is not just about tidepools but even more so about the ways…to live a life in sync with the rhythms of the land and the sea .” —Wall Street Journal
“A philosopher’s wish to provide a way of comprehending the place of the individual in a vast and shifting world…Spending time in Nicolson’s rock pool will change your life and the way you view the lives of others.” —The Guardian (London)
“A marvel.” —Kirkus Reviews (starred review)
“Mixing history, science, and precise descriptions bright with inventive metaphors and profound revelations.” —Booklist (starred review)
English actor Leighton Pugh's engaging midrange voice, which is both crisp and warm, is the perfect accompaniment to Adam Nicolson's consideration of life in those intertidal rock pools particularly beloved by children--and grown-ups like Nicolson, an award-winning author, naturalist, and historian. —AudioFile

Adam Nicolson is the British author of many books on history, landscape, and great literature. Among his many awards and honors are the Somerset Maugham Award, the W. H. Heinemann Prize, the Scottish BAFTA, the Spears Book Award, the British Topography Prize, the Ondaatje Prize, and others.