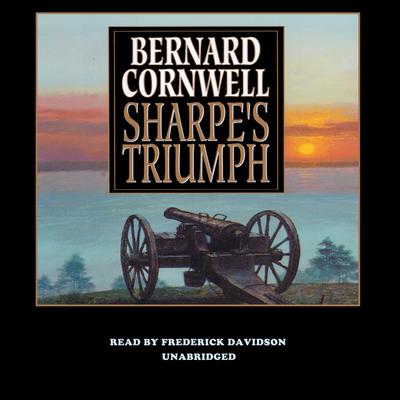 Sharpe’s Triumph: Richard Sharpe and the Battle of Assaye, September 1803

Since earning his sergeant’s stripes at the bloody siege of Seringapatam, Richard Sharpe has led a peaceful existence. But his easy life meets a brutal end when he is the sole survivor of a murderous attack by a cold-blooded English officer who has defected to join the mercenary forces of the Mahratta confederation in India.

Sharpe vows to avenge his comrades, even if he must pursue the turncoat to the ends of the continent. His quest takes him deep into enemy territory, where the accepted rules of engagement have been discarded and ever-shifting loyalties create an environment of dangerous uncertainty. The paths of treachery lead Sharpe’s company to join the army of Sir Arthur Wellesley, future Duke of Wellington, to take on the Mahratta horde. Sharpe must survive the carnage to tell the tale of one of the greatest battles of the century.

“Cornwell's dramatization of this true-life event needs no help coming to life, and Davidson meets the author's brilliant storytelling with insight of his own…His immaculate enunciation and perceptive pacing capture both the formality of military structure and the horror of hand-to-hand combat.” —AudioFile
“Cornwell continues to luxuriate in the details of battle in his continuing series of novels following the exploits of British soldier-adventurer Sergeant Richard Sharpe...Eminently successful historical fiction.” —Booklist
“As usual, Davidson does an outstanding job narrating this vivid account of a soldier’s life in India. Cornwell has again revealed the gore and the glory of those times.”  —Today’s Librarian
“Bernard Cornwell writes more gripping battle scenes than any other contemporary author.” —Kirkus Reviews