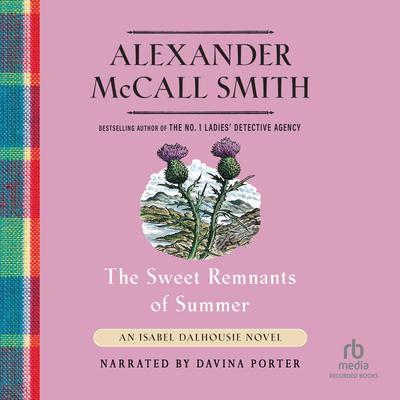 The Sweet Remnants of Summer

Everyone’s favorite moral philosopher, Isabel Dalhousie, finds herself caught up in a delicate dispute between members of a prominent family while her husband, Jamie, is dragged into an internecine rivalry of his own.

When Isabel is invited to serve on the advisory committee of the Scottish National Portrait Gallery, her husband, Jamie, expresses concern about the demands on her time. Never one to duck an obligation, however, Isabel says she’d be happy to join. There she meets a woman named Laura, whose husband—a prominent wine merchant from an illustrious family—and son are at odds. Laura asks whether Isabel might arbitrate between them. Isabel is reluctant to intervene in a familial drama, but, always one for practical and courteous solutions to theoretical problems, she feels obligated to help. Will the demands on her moral attention never cease?

Meanwhile, having criticized Isabel for getting involved in the affairs of others, Jamie does precisely that himself. He’s helping to select a new cellist for his ensemble but suspects that the conductor’s attention may be focused on something other than his favored candidate’s cello skills. Jamie feels it’s important that the most qualified applicant gets the job—but how to determine whether the conductor has the right qualifications in mind?

With so many complicated and fraught issues demanding their attention, Isabel and Jamie will have to tap deep into their reserves of tact and goodwill as they navigate the tricky and turbulent waters of these emotional matters.

“[The series] offers tantalizing glimpses of Edinburgh’s complex character and a nice, long look into the beautiful mind of a thinking woman.” —The New York Times Book Review, praise for the series