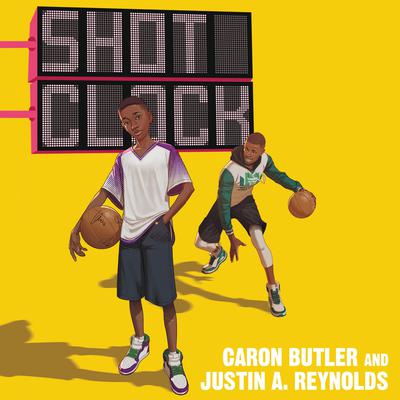 By Caron Butler  and Justin A. Reynolds
Read by  Marc Anthony Samuel

Former NBA All-Star Caron Butler and acclaimed author Justin A. Reynolds tip off the first book in a new middle grade series about a young boy trying to make his mark on an AAU basketball team coached by a former NBA star in his hometown. Perfect for fans of The Crossover and the Track series. *A Junior Library Guild Gold Standard Selection!

Tony loves basketball. But the game changed recently when his best friend, Dante, a hoops phenom, was killed by a police officer. Tony hopes he can carry on Dante’s legacy by making the Sabres, the AAU basketball team Dante took to two national championships.

Tony doesn’t make the team, but Coach James likes what he sees from Tony at tryouts and offers him another chance: join the team as the statistician. With his community reeling and the team just finding its footing on the court, can Tony find a path to healing while helping to bring the Sabres a championship?

Justin A. Reynolds has been a pest control operator, night security guard, steel mill janitor, NASA intern, salesman of high-end faucet fixtures, and carpetflooring installer. He was most recently a registered nurse before trading his stethoscope for a pencil, but he likes to think both instruments reveal the heart. He lives in northeast Ohio, home to snow, Lake Erie, and the Cavaliers. You can visit Justin at www.justinareynolds.com.

Caron Butler is a fourteen-year NBA veteran, two-time All-Star, and a current assistant coach of the Miami Heat. He is extremely active with organizations that specialize in youth outreach, particularly in his hometown of Racine, Wisconsin. In addition to his extensive philanthropy efforts, Butler is a business owner with great plans to own an NBA team in the future.